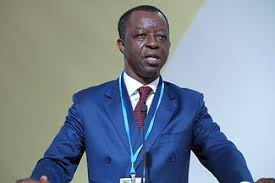 The Pan-African Parliament, PAP, has extended hearty congratulations to the South African President, Cyril Ramaphosa, on his emergence as the new Chairperson of the African Union.

Ramaphosa was elected Chairperson for the year 2020 on Sunday at the opening of the 33rd Ordinary Session of the AU Assembly of Heads of State and Government in Addis Ababa, Ethopia, replacing the Egyptian President, Abdel Fattah el-Sisi.
South Africa has been hosting PAP, the AU’s legislative arm since 2006.

President of the African Parliament, Rt. Hon. Roger Nkodo Dang, while reacting to Ramaphosa’s emergence, said the development came at an opportune time for the AU, while pledging the total support of the continental legislature to Ramaphosa’s headship of the AU.

Dang added that he has absolute confidence that the AU would record numerous achievements under the leadership of the South African President.

He said, “The election of South Africa as the incoming Chair in February 2020, raised our hopes as direct beneficiaries of the Host Agreement between the AU and the Government of South Africa.

“The optimism of the continental Parliament stems from President Ramaphosa’s recent pronouncement of his approach; which will focus on building a politically stable Africa, empowerment of women and an economically growing continent.”

The PAP helmsman further stated that “the continent continues to draw inspiration from South Africa’s institutions of governance and a functional parliamentary democracy. The PAP will harness this opportunity as it endeavours to establish itself into a prime institution of governance on the African continent.”

The African parliamentary assembly equally extolled the Egyptian leader, Fattah el-Sisi, for remarkably navigating the AU and strengthening “the state of our institution during his term in 2019.”

My Brother Was Arrested In Kenya -Emmanuel Kanu