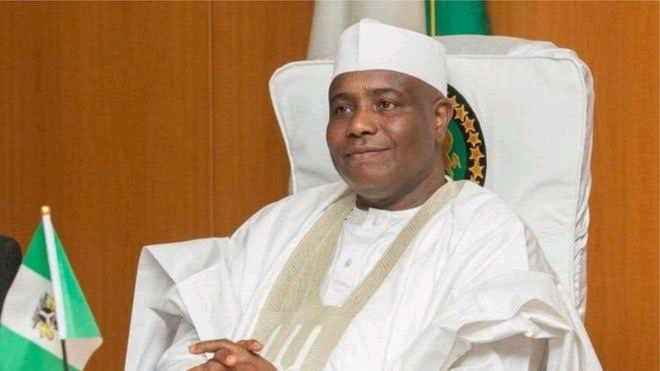 Sokoto State governor, Aminu Tambuwal, has been described as the best candidate the opposition Peoples Democratic Party, PDP, can present for the 2023 presidential contest.

This was the contention of a coalition of youth and women groups,user the aegis of Generation Next Collective, GNC.

The GNC therefore called on PDP leadership to act fast and be more emphatic about the direction the party intends to go in picking its candidate for the 2023 presidential election.

In a statement in Abuja, the co-Convener of the group, Barr Ruth Edehemon and Malam Rufai Abdulahi, said, “One person, in our estimation, that ticks the right boxes, is the governor of Sokoto State, and former Speaker of the House of Representatives, Aminu Waziri Tambuwal. A lawyer, lawmaker, public administrator and chief executive of a state in the past seven years. It is our view and those of many, that the PDP would not be making a mistake with his choice and wealth of experience.”

The GNCstatement further reads, “Across the nation, there is a general consensus, that the 2023 election, should as a matter of importance, answer some nagging questions, among which are equity, justice and inclusion, the key tripod that ensure democratic balance.

“And PDP as a democratic party, should not shy away from this conversation that is rooted in fairness and truth. Beyond sentiments, the South and North are deserving of fair play and inclusion, a twin democratic feature that have been unwittingly starved by the government in power and would require an urgent restoration for the common good and unity of our dear nation.

“It is expedient that the PDP addresses the lingering ambiguity over which zone the presidential candidate should come from; and follow it up by building an honest purpose-driven, robust consensus, as may be allowed by law, around a suitable aspirant that possesses not only the leadership skill to unite the nation, but also be a veritable linkage between the older and the current generations; such that the sublimity of wisdom and restraint of leadership would find a meeting point with the treasure trove of the energy, creativity and ingenuity of the youth demography.

” Incontrovertible records show that the PDP as a party has managed the affairs of the nation at the presidency level for 16 years. And it’s a fact that the Southern part of the nation had held sway for over 14 years of the 16, through former Presidents Olusegun Obasanjo, eight years – 1999 -2007 – and Goodluck Jonathan, six years – 2010 – 2015. While the North had only ruled for a little over two years under the late former President Umaru Yar’Adua, who unfortunately died in office.

“So, we strongly believe that rather than this disturbing silence that is eliciting enflamed passion and seeming confusion, over the zone that should be supported for presidency in 2023 in the PDP, the party should be bold to speak up by putting this record into consideration, bring its leaders from both the North and South on a round table, address their deferent sentiments, do necessary in-house negotiations and present a formidable, united front that would give the party a meaningful chance in the challenge ahead.”

On the aspirant from the North with requisite leadership and managerial experience, personality and public appeal, that could benefit from the consensus approach, the GNC said, “With no prejudice to other prominent aspirants from the zone in PDP, the party should build consensus around someone with less controversy or negative public sentiments, with an unquestionable vigour for the demanding job of a president, essentially now that public scrutiny is rising over age and other physical variables of potential candidates, ahead of the general election.

“Tambuwal’s privileged interactions with different interests, sectors and segments in and out of the Nigerian society, would enrich the contest and brighten the chances of the PDP, should it act fast and rally its faithful, contacts and resources around him.

“Democratic governance has become progressively very dynamic that a person with an invaluable hands-on experience in the legislature, judiciary and executive arms of government, such as Governor Tambuwal, would be an asset to PDP’s quest to return to power in 2023.”

Finally, The London Bridge Has Fallen