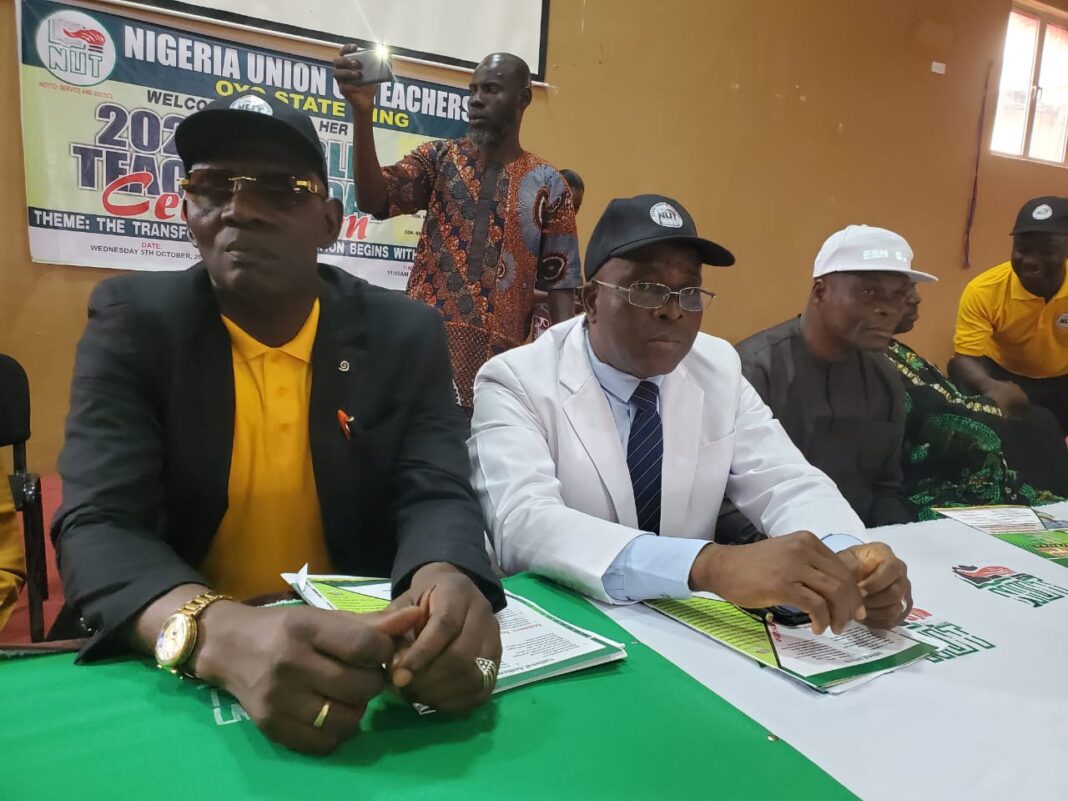 …As NUT Awards Adeniran, Abdu-Raheem, Others

The Oyo State government has approved the absorption of 2,000 primary school teachers, initially seconded to the Post-Primary Teaching Service Commission, PP-TESCOM, in the state, during the previous administration of Senator Abiola Ajimobi.

This was revealed in Ibadan by the Chairman, TESCOM, Pastor Akinade Alamu, on Wednesday during the celebration of the 2022 World Teachers’ Day.

A statement signed by the Head of the Media Team of OYOSUBEB, Olamide Adeniji, quoted the TESCOM Chairman as saying that the absorption of the teachers into the post-primary sub-sector of Oyo State permanently is another sign of the present administration’s commitment to the development of education.

He equally revealed that the Oyo State government has approved the next round of promotions in the state civil service, adding that after necessary paperwork, the exercise will commence.

The Chairman advised politicians to desist from politicizing education in the state, saying that education under Seyi Makinde has been progressing.

Speaking at the event, the Commissioner for Education, Science and Technology, Barr. Rahman Abiodun Abdu-Raheem, appealed to teachers in the state to embrace the state government’s efforts in improving the education sector.

He added that Oyo State government will not rest on its oars in ensuring the education sector keeps soaring high.

He said, “It is pertinent to re-emphasize it that the machinery of the state, ably led by His Excellency, Engineer Seyi Makinde, has the determination to transform the education sector.”

He said that Oyo State government under Governor Makinde has put in place lots of activities in achieving his lofty ideas for the sector.

Also speaking the Executive Chairman, Oyo State Universal Basic Education Board, OYOSUBEB, Dr. Nureni Aderemi Adeniran, said the board will continue to work for the welfare of teachers in the state.

Adeniran said, “To whom much is given, much is expected; therefore I appeal to you to key into the government’s resolve to bring back the lost glory of the state in education, by making sure our children excel both in internal and external examinations.”

He therefore charged them to have a clearer vision of the goal and support the Ministry of Education, TESCOM and OYOSUBEB in making sure Oyo remains top in the education sector.

According to the Chairman of the Union, Comrade Raji Oladimeji, the awards came on the heels of their exemplary leadership, dedication and unalloyed support to teachers’ welfare.

He commended the Oyo State government’s various welfare packages that has encouraged teachers in remodelling the society and training students in the state.

While he pointed at the regular payment of teachers’ salaries and other entitlements, he also commended the distribution of free textbooks and exercise books in all schools.

The awardees include: Ahmed Adeniyi Raji; the Chairman of OYOSUBEB, Dr. Adeniran; the Head of Service, Alhaja Amidat Ololade Agboola; and the Commissioner for Information, Culture and Tourism, Dr. Wasiu Olatubosun.