Yes
Moremi Ajasoro, the daughter of Chief Asao of Epe Ekiti!
I am talking about the strong woman
Who proved to the world that Nigerian women are imbued with humongous acting talents.
The woman who identified, suffered, laboured and stood by and with her husband’s trade –
Who 44 years ago lost her golden husband!
That spectacular Nigerian theatre legend – the late Duro Ladipo to the grim palm of death ! 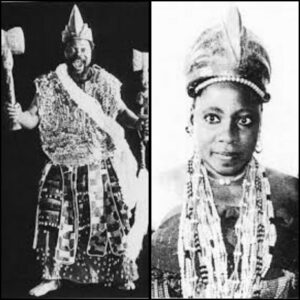 Obakoso – the play which won gold medals at Berlin and the Commonwealth Theatre Festival!
The man who was not acting like the Sango, but who was Sango himself.
The man who spits fire out naturally and blows out flames effortlessly!
The man who endeared Nigerian theatre to the global consciousness, recognition, acceptance and embracement.
The man who performed ‘Obakoso’ in Germany, rain-drenched the audience at a very unusual time when rain was not expected!
The man whose charisma and spectacular commands on the stage warranted a special invitation to the Buckingham Palace, the abode of the Queen of England!
The man who was not only commended by the Queen of England, but who the Queen hosted, had a special dinner with him; he and his wife, Biodun spent a whole night at the palace educating the Queen and her family on the uniqueness and niche of the Nigerian theatre

The man who encapsulated his stage plays exhibiting the rich cultural values, ethics, mores, art, and artefacts of Yoruba. The man who selflessly promoted, sold, marketed, showcased, exhibited and endeared Nigerian traditional theatre to 16 countries in the world.
The man whose singular acts and plays stimulated, ignited, and stoked the embers of embracing theatre as a worthy profession in thousands of Nigerians.
The man whose death was announced by the sporadic shattering of the cloud by thunder and heavy rainfall.
The man who died in his prime when he had catapulted Nigeria theatre practising from domestic affairs to intercontinental acclamation.

He was arrested by death when he was supposed to be reaping the fruit of his labour.

Left behind a house at Bode Wasimi, Ibadan, Oyo State. A house and a compound where most of his TV series were acted.
A house where all his materials of acting are still kept.
A house, which if it is planted in a country where arts icons, arts, cultural artefacts, heritage items are valued would have been turned into a museum or a National Monument!
A house which is silently crying for attention and renovation.

He left a wife, a dedicated wife, a woman of virtue who has refused any man to lay upon her or beside her since the man left her at age 40.
And at age 80, Chief Mrs Biodun Duro Ladipo is not only alive but very hale, happy, healthy and joyful.

So you are expecting bad news about her…?
Chai!
She is alive!
‘Nothing do her.’

Diaspora Committee Congratulates Nigerian-Americans Elected Into US Academy Of Engineers