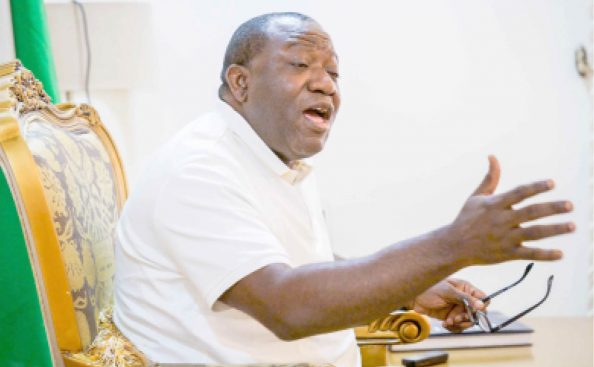 Suspended kingmakers of Orin Ekiti in Ido/Osi Local Government Area of Ekiti State have called on the state Government to reverse their suspension or have a legal action against him.

At a press conference in Ado Ekiti, on Monday and speaking on behalf of suspended kingmakers, the Onikare of Orin Ekiti, Chief Bamidele Fasuyi and the Eletin, Chief Francis Falua, alleged that they only heard about their suspension on radio.

Describing their suspension as illegal, null and void in the face of the law, Chief Fasuyi accused the government of acting like a “mafia” in the way and manner it handled the Obaship tussle in the town, by allegedly sidelining those who matter and pivotal to the selection of a new oba.

He said, “Soldiers and policemen just invaded our town, particularly the palace and Apelua hall, where we revere as sacred places. They forcefully went there and took away some of the paraphernalia relating to installation of Oba in Orin.

“In fact, just take a look at the caliber of warrant chiefs they brought, they were riff-raffs and nonentities.

“At the demise of Olorin in 2015, the local government wrote to us and requested that we select someone from Ajibewa ruling house, basing it on a gazette generated in 1998 under Navy Capt. Atanda Yusuf.

“But we replied on behalf of the town that the town only knew of Olubunmo and Famokiti royal dynasties and that Ajibewa was a product of illegality. The gazette they relied on was a fake.

“The government should leave Orin alone. The Morgan Commission of Enquiry of 1978 established two ruling houses, so we didn’t know where they got the 1998 gazette that overrode the Morgan report.

“We want our suspension reversed with immediate effect and if they fail to act accordingly, we will have no option than to go to court to seek redress.”

He further urged the government to make public the recommendations of the Justice Jide Aladejana Judicial Commission of Enquiry on chieftaincy issues which warranted the present action and stop being partisan by releasing to only Ajibewa group.

Chief Fasuyi, on behalf of the people of Orin, described as product of illegality,  the concocted 1998 White Paper.

However, the Ekiti State Commissioner for Local Government and Chieftaincy Affairs, Professor Adio Folayan, justified the government’s actions, saying that the suspension order was clamped on the chiefs when it was discovered that they were not passionate about the selection process.

He said, “The government had no vested interest in who becomes the Oba. But we have to act in public interest because there must not be any vacuum in the Obaship stool after five years.

“The chieftaincy law permits us and gives the powers to government to appoint warrant chiefs and we acted within that powers.”