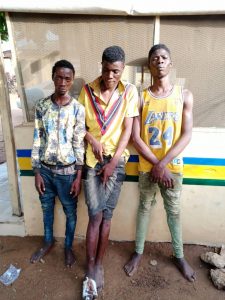 Items recovered from them includes phones and bags they had snatched from three different victims.

The suspects have been charged to court.

In a related development, operatives from Ipaja division of the state command also arrested two notorious suspects who specialised in car snatching and stealing vehicles from parking spaces, mostly in worship centres.

The suspects, Bamidele Adebayo, ‘M’, and Hakeem Taofik, ‘M’ had on January 19, at about 1300 hours, stole a Toyota Corola saloon car at a church in Shagari Estate, Ipaja and moved same to Ijagba village in Sango Ota, Ogun State.

Detectives from Ipaja Police Station recovered the vehicle at about 1600 hours of the same date from the suspects, who have also been charged to court.