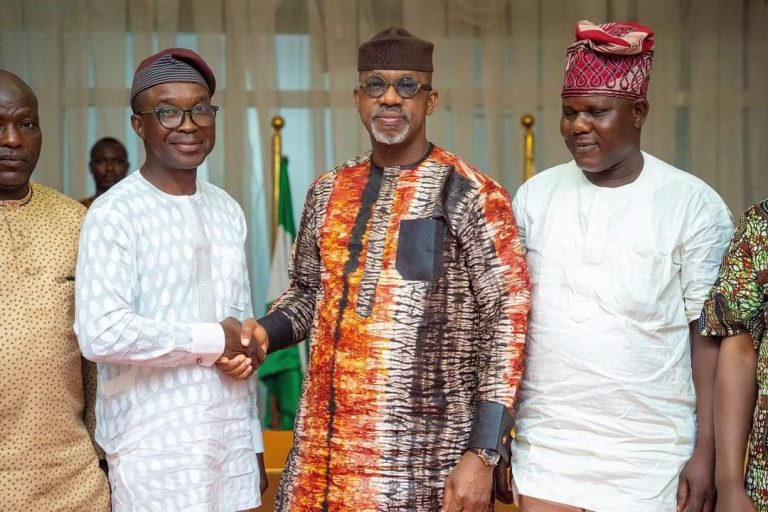 Ahead of the 2023 general elections, a scion of the Otegbeye family in Ilaro, Yewa South Local Government Area of Ogun State and son of legendary politician, Dr. Tunji Otegbeye, Dr. Leke Otegbeye, has joined the All Progressives Congress, APC.

The former gubernatorial aspirant on the platform of the Peoples Democratic Party, PDP, said that he joined the APC and will lead campaign for Prince Dapo Abiodun’s reelection because he was convinced that if his father was alive, “he would be in the progressives’ fold.”

Otegbeye, who led other leaders and stalwarts of the African Democratic Congress, ADC, to the ruling party, told newsmen after meeting with Governor Dapo Abiodun at the Presidential Lodge, Abeokuta, that he and the former ADC members identified the personal qualities of the governor and his style of governance, hence, their decision to join the APC.

He said, “I see His Excellency as a cool, calm and collected individual and a man one will be a delight to work with. He is a compassionate person, who has the capacity to lead and it will be good to align with somebody who can lead people in the right direction.

“Apart from me, I am bringing people of like minds and of high integrity, who are ready and willing to add value to the party and work for its success.

“We have seen what the governor is doing across the state and I must say he is doing very well. As you know, government is a continuum and we are certain that he is going to do even better. From where he started, he has done a great job and I believe if given another opportunity, he will continue and enhance what he has done so far.”

The former chieftain of the ADC lauded the governor for keeping his promise of even distribution of developmental projects to all parts of the state, noting that the current administration has been able to touch all sectors of the economy in the last three and a half years in the saddle.

On the timing of their defection to the ruling party, Otegbeye said, “Sometimes it takes time to measure decisions, so once you make the decision, it stands. I am a progressive and if there is any where I should be, I should align with the APC as a progressive. I think that is where I belong.”

A member of the extended Otegbeye family, Biyi, is the gubernatorial candidate of ADC, who was recently stopped by a court order from contesting the governorship ticket.

Responding, the Senior Special Adviser, SSA, on Political Matters, Tunji Egbetokun, described the former ADC members as men and women of proven integrity and responsibility, who have seen the light and decided to take a stand with the progressives in the state.

He commended them for choosing to align with the ruling party and work towards its total victory in the 2023 general election.

Welcoming the defecting ADC members into his campaign train, Governor Abiodun said, “It is always good to appreciate good deeds. I assure you that you will be treated as equal stakeholders in the APC.”

He thanked Dr. Otegbeye for honouring the memory of his late father by identifying with the ideals of good governance, inclusive leadership and accountability in politics.

Governor Abiodun added, “We want to assure you that you will be treated with decorum and we will not disappoint you in any form.

“If the ultimate goal is for the welfare, well-being and wellness of our people across the length and breadth of Ogun State is your driving force to join us, you are welcome to join the winning streak of our building our future together.”