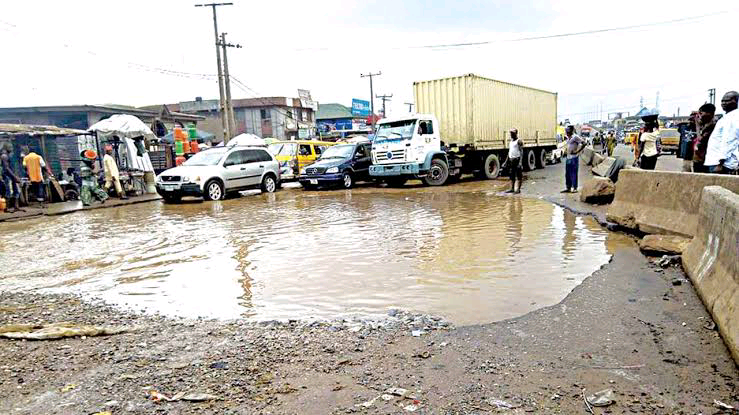 President Muhammadu Buhari and the Ministry of Works and Housing, under the leadership of Mr. Babatunde Raji Fashola, have been called upon to expedite action on the reconstruction of the Lagos-Abeokuta Expressway.

A non governmental organisation, NGO, Good Governance Initiative, GGI, made the call in a statement it issued, signed by a Sango-Ota-based public affairs analyst, Alhaji Malik Ibitoye, and made available to the media.

The NGO called the attention of Mr. Fashola to the negative publicity the dilapidated portion of the road has been generating for the not only the All Progressives Congress, APC,but also the Ogun Stay government, under the leadership of Prince Dapo Abiodun.

Ibitoye said in the statement that the Sango area of the road and some other parts stretching from Ijaiye to Kola, Alakuko, Toll Gate Bus Stop and even extending to other parts of the road on the way to Abeokuta, the state capital, has become eyesores and a source of embarrassment to both the state and Federal governments.

Insisting that Governor Abiodun is known to be proactive in the area of infrastructure development, the analyst said that it is obvious that many residents of the state are ignorant of the demarcation of roads as local, state and federal roads, adding that the issue has led to bad publicity for the APC.

He said, “There is no doubt that President Buhari and the Minister of Works and Housing, Mr. Fashola are interested in APC winning Ogun State and some other states apart from winning at the federal level.

“However, the early completion of Lagos-Abeokuta Expressway will boost the image of the APC, while doing the contrary would lead to a bad publicity for the party.

“The adversaries of the Ogun State government and rival political parties are capitalising on the bad state of the road to spread falsehood about the state and federal governments and this is dangerous as the 2023 general elections are fast approaching.”

The NGO emphasised the need for the Federal Government to rise to the occasion and make the expressway motorable, adding that the road is strategic to the movement of the people to the state capital and to other parts of the country.

Making allusion to a trending video on the road, Alhaji Ibitoye said that urgent action must be taken to make the road passable, as Governor Abiodun has been working with the limited resources available to the state government to provide good governance for the people of the Gateway State.

He added, “The APC cannot afford to allow this dangerous situation to continue at this material time, when people are waiting for the scorecard of the state and federal governments.

“To this end, it is advisable that Mr. Fashola should revisit the Lagos-Abeokuta Expressway project as he promised to do in a recent interview on a national television, where he even told Governor Abiodun to allow the Federal Government handle the road and that contractors would soon be mobilised to site to complete the project.

Reminding Buhari and Fashola that delay is dangerous and that a stitch in time saves nine, the NGO stressed that the government must let the people know that it would not renege on its campaign promises to them.