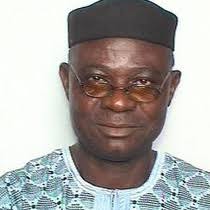 …Describes Him As Insipid, Bird Of Passage

A group within the Ekiti State All Progressives Congress, APC, the  Ekiti Positive Force, EPF,  has lashed out at a former member of the House of Representatives, Dr Ifeoluwa Arowosoge,  for what it described as his insensitivity to the plight of the people of the state.

The front line group also claimed that the political associate of former governor of the state, Engineer Segun Oni, is a bird of passage and insipid, who has never hidden his disdain for peace and orderliness.

In a statement signed and released in Ado Ekiti on Sunday by its chairman, Mr. Bola Ogundana, EPF lamented that while the whole country is under lockdown due to the health hazard occasioned by the pandemic  COVID-19 disease, with its attendant death tolls, a self-professed political leader is attempting to use the period for political voyage that journeys to self destruction.

Describing such move as “unbecoming and mischievous in the least,” the statement added that Dr Arowosoge is behaving true to type, as he has always exhibited negative energy in chicanery, uncaring and insensitive.

The statement noted, “Arowosoge is a reckless politician, who lacks restrain and good judgement. He has become not only a political leper, but has always invited dooms to his political associates. He is a huge political void, a liability and a crass  opportuntinist who always seeks cheap attention with incontinent comments”

Remarking that it was sad that a one time House of Representatives’ member could “decide to use the period during which the people of the state are experiencing severe discomfort due to the pandemic COVID-19, to attempt a political war against our party leaders,” the EPF added, “We appreciate the gesture of the the founder and the Chancellor of Afe Babalola University, Ado Ekiti, Are Afe Babalola and the indefatigable legal luminary, Chief Wole Olanipekun, who donated heavily towards the battle against COVID-19, and we advise people like Arowosoge to try and emulate these great Ekiti leaders, instead of trying to cause confusion  and foment trouble in the state.

”As stakeholders in the party, we  hold the views that any  individual that attempts to pull down the house that provides shelter for all of us will always be resisted stoutly, we hereby warn Dr Ifeoluwa Arowosoge  and his ilks that they are doomed to be blown by the ill-wind they are trying to bring to our dear party

Claiming that  Arowosoge, an ally of former governor of the state, Chief Segun Oni, posseses a fake personality that can make anyone fall for him, the statement said that he is but “actually a shepherd without a sheep,” adding, “He is a political liability to Oni and he is one of the reasons the man is politically lost in the limbo. He is one of those pushing Oni to his political golgotha.

“Without Oni, he is hollow and can’t attract any followership ; he is totally worthless to all the parties and associates he has been with since his foray into politics, because he cannot draw a single vote to his party during election and he is a poisoned chalice who gathers no palpable value to his associates as his people, even his household have no iota of respect for him.

“A decent politician should have election value, not Arowosoge, who is a carpetbagger and a leech on political associates and parties.

“He sees politics as a means of survival and any time he is not holding any public office, he is like a fish out of water.

“He has lost dignity and self respect in his quest to portray himself as someone that knows and sees everything.

“It is unfortunate that Arowosoge and his cronies in the so-called Atunse Ekiti could be herding and hedging the former governor and even directing his political steps.

“While not holding brief for the present administration of Dr Kayode Fayemi, his is still the most transparent and open leader around, contrary to insinuations that its activities are shrouded in mystery. We wish to add that many Atunse Ekiti members have been given political appointments contrary to the lies and propaganda of Arowosoge and his ilks .

“All actions and activities of government are in public purview and Governor Fayemi has been forthright by carrying along the people in decision making process.”