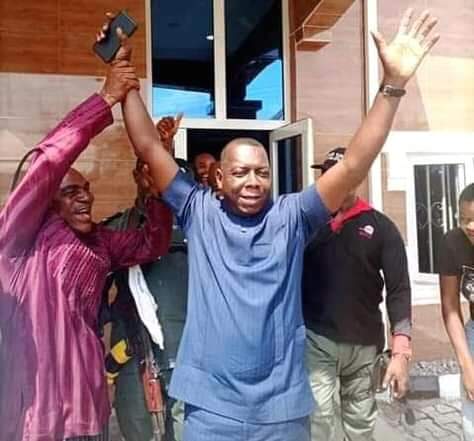 The tribunal also demised the petition filed by Joe Agi, SAN, praying the tribunal to upturn the result of the Cross River North senatorial election in his favour, claiming that he is the authentic winner of the contest, having come second in the contest since, according to Agi, the Peoples Democratic Party, PDP,didn’t have a candidate in the election.

Recall that Agi had approached the tribunal to upturn the election result in his favour and declare him the winner, given the fact that the PDP, the 3rd respondent and INEC, the 4th respondent in the petition, presented two candidates in the elections.

But delivering its judgment,the three-man headed by Justice Yusuf Ubole Muhammad in suit No: EPT/CR/SEN/03/2020, squashed Agi’s petition and uphold the result of INEC, which declared Dr Stephen Odey as the winner, stressing that Odey, the PDP candidate participated in all the stages of the senatorial contest, and scored the highest votes.

The three-man tribunal, which had as other members Hon. Justice s John Olajide Abe and Gilbert Ngele, averred that Odey, who participated in all the stages of the elections scored 129,207 votes, against his APC petitioner Barr. Agi, who scored 19,105 votes in the said senatorial election, is still the winner of the election.

The Director-General, Cross River State Due Process, Barr. Alphonsus Ogar Eba, while reacting to the judgment at the court premises said, “I am very happy, but happier, because God has come in human form to show Himself in this judgment that has just been delivered.”

Ogar stated that the good thing about the judgment delivered is the fact that the action of INEC on the 18th of December, 2020 which was the plank on which the second respondent, Jarigbe Agom Jarigbe, has been hinging on, has been declared by the tribunal as a jiggery pockery, stressing that he doesn’t know what those who had never been pleased from the time Odey was declared winner would do.

He described the journey of political opponents as vain expectation, stressing that Odey’s persecutors have stamina and energy for trouble.

He opined that that probably is the reason why the tribunal found no reason to upturn the election result against Odey, who he described as winner of the contest.

He said “What the court has said today was that the petition Agi, SAN, filed,saying that the PDP had no candidate was not true at all.

“That court found here today that Senator Dr. Stephen Adie Odey was the candidate that was dully sponsored, who participated in all the stages of the election, and was declared winner on the 6th and everything that was done there was perfect and court could not find any reason to upturn that.

“It also went further to say that, because the second respondent Jarigbe Agom Jarigbe’s, name was not forwarded, he did not participate, everything he did was just a nullity and of no avail.

“Then the second point is that all the criminal allegations that the petitioner raised about the second point of the issue he raised, he himself abandoned it, but the tribunal went further to say that those grounds do not hold according to section 138(1) A,B,C, of the Electoral Act as amended in 2010.

In his remarks, Special Adviser to Gov. Ben Ayade of Cross River State on Diaspora, Dr. Mathew Okayim, described the judgment as one that is characterized by merit.

Okayim described Odey as a grassroot man who can win elections any day any time, as his stay in the Senate is the peoples mandate.

He added, “If I were those disturbing him, I would have allowed him to complete his tenure and prepare and wait for him in 2023, instead of troubling and distracting him from exhausting the mandate given to him by the people.”

Reacting, counsel to petitioner, Oladimeji Ekemgba, averred that he was going to study the judgment and avail his client with advice on the next step to take.

Ekemgba said, “We have seen some appealable grounds, we will test it and be able to know whether the political party is permitted under our law to file in two candidates for an election.”

He said, “Our main ground here is that the PDP fielded two candidates for the election, while their other party fielded one candidate.

“The judgement of the Supreme Court is that Jarigbe is the candidate of the party, how come Stephen Odey is issued a certificate, is what we don’t know.”

The Murder Of George Floyd And The Nigerian Parallel