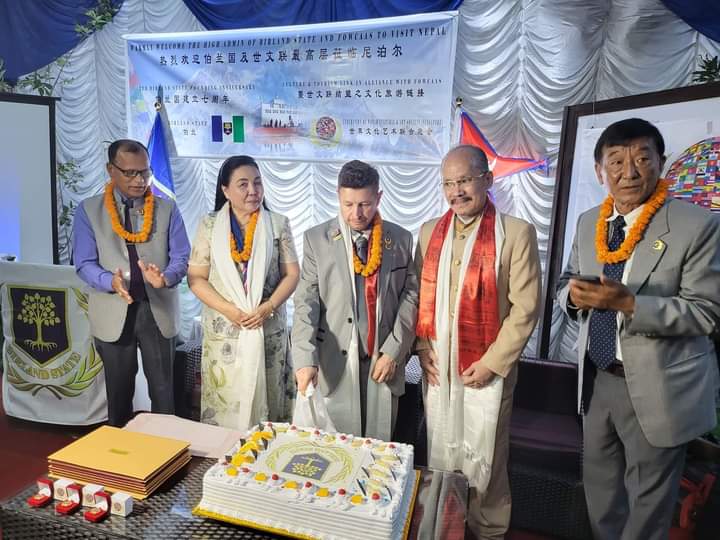 The month of May, 2022 will remain indelible in the minds of the people of Nepal as the constitutional monarchy of Birland State, led by its founder and President, His Royal Majesty, the King Emir, A. Haiyawi and the Prime Minister, Her Royal Majesty, Queen Eden Soriano Trinidad, moved the high and mighty personalities  of the state to Nepal for the anniversary celebration of the emerging super country in Africa.

Birland as country is very fortunate to have responsible and quality leaders with high sense of leadership character and administrative acumen.

The Nepalese Birland Team who were the host led by His Excellency, Mingma Dorji Sherpa, owner of the Chhahari Retreat Hotel, The Birland Minister of Aviation( Former Managing Director of TIA), His Excellency, Debendra Kc and the founder of Jara Foundation in Nepal , Zen Master Poet Krishna Prasai along with other important dignitaries besieged the International Airport in Kathmandu, the capital of the great country- Nepal to welcome the delegation of Birland state with fanfare and pageantry to the country.

Birland is the 55th state in the African continent, situated in the South of Egypt and North Sudan with offices and representatives’ office in several countries of the world.

The state is larger than Dubai and the official spoken language is English.

At the meeting in Nepal with the Economic Community 6th Region (ECO-6) and Africa Diaspora Central Bank (ADCB), the  President His Royal Highness, the paramount Chief Timothy Rex Semako McPherson proposed and agreed to build three palaces and the Birland International airport.

Given the break down of the projects to be built according to the Prime Minister of Birland State, Her Royal Majesty, Dr. Queen Eden Soriano Trinidad said the following infrastructure will be constructed under the agreement in Birland :

The  Prime Minister of Birland, who is also the Secretary-General of the United Global Kingdoms, further disclosed  that the President of ADCB, His Royal Highness, Paramount Chief, Timothy Rex Semako McPherson, was invited to a physical meeting with the Birland administration at Kathmandu for a 10-day commemoration of the 7th founding anniversary of the State of Birland.

The Prime Minister explained that the motive was to bring more confidence and trust to the confirmation of electronically signed Diaspora Direct Investment, (DDI) and agreement that the State of Birland founder and King Dr. Emir A. Haiyawi had signed last year.

Birland as a newly emerging country in the African continent with land mass of 2,060 square kilometer, is standing on the solid support of several royal kingdoms in Africa, Indonesia, Ukraine, Russia and Venezuela, who are official members of the United Global Kingdoms and the United Kingdoms of Africa – both organizations are legally registered in South Africa and ECO-6 Community Region.

The Birland State, often referred to as Dubai of Africa, has official international representative office in Singapore through the Deputy Prime Minister and the Minister of Culture, His Royal Highness, Chief Grand Master Jason Tan Beng Siang.

In ensuring financial prudence and accountability, the constitutional monarchy of Birland State agreed and accepted  to appoint ADCB as its official Central Bank with its currency known as the African Kingdom Lumi (AKL).

As the saying goes every nation, societies and institutions are judged by its leadership, habitants, followers or citizens, the people of the sovereign state of Birland are being excellently judged by the global citizens and communities as a fortunate country for having quality pathfinders in persons of the founder and President, His Royal Majesty the King Emir. A . Haiyawi and the amiable, workaholic Prime Minister, Her Royal Majesty, Queen Professor Eden Soriano Trinidad for their unceasing quest for the betterment of Birland.

As a humanitarian country, a Certificate of Recognition was for  recently issued by for the  World Humanity Commission, WHC, to Birland State with accreditation number 01051CR, certifying that State of Birland, a new emerging country, has adopted the integrity pledge and is committed to uphold highest standards of integrity, Democracy, rule of law, good governance, peace and unity, and follow ethical practices in conducting its affairs for the advancement of humanity.”
This is  the second time such Honour and recognition were given to Birland by the World Humanity Commission, WHC.

The world awaits as Birland is taking the lead as Africa emerging socio-economic hub for international market.
Welcome to Birland, the Dubai of Africa.

•Idakwo, a journalist, can be reached on editornewsmaker@gmail.com or aliabdul.idakwo34@gmail.com