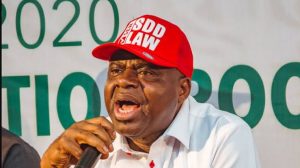 A former commissioner in the immediate past administration of Seriake Dickson in Bayelsa State, Dr. Godson Torukuru, has congratulated Senator Douye Diri, on his inauguration as the new governor of the state, alongside his deputy, Senator Lawrence Ewhrudjiakpo.

Torukuru, also a one-time Executive Chairman of Bayelsa State Board of Internal Revenue, equally saluted his boss, Dickson, declaring that the people of Bayelsa would continue to remember him for his good works and outstanding feats that have put the state on a solid footing.

The former commissioner, in a press statement, expressed confidence that the newly inaugurated governor, who he described as a pragmatic and purposeful leader, will turn around the fortunes of the state, by working hard to consolidate on the achievements of his predecessor, in the interest of Bayelsans.

Torukuru noted that the Supreme Court judgement, which paved the way for the duo of Douye and Ewhrudjiakpo to become governor and deputy, was an answer to the prayers of Bayelsa people.

Saying that Bayelsans prayed and God has answered their prayers, Torukuru said, “I congratulate His Excellency, Senator Douye Diri, on his inauguration as the brand new governor of Bayelsa State, together with his deputy, Senator Lawrence Ewhrudjiakpo.

“No doubt, their triumphant emergence has rekindled the hope of Bayelsa people. The wild jubilation and celebration that followed the verdict of the Supreme Court, across the length and breadth of Bayelsa State, was an indication that the people were, indeed, delighted that their prayers have been answered.

“I have explicit confidence in the ability of Senator Diri to govern the state well and place it on the path of progress. I have the total conviction that he will not disappoint the good people of Bayelsa State. As a matter of fact, he has all it takes to effectively pilot the affairs of the state to greater heights. Diri is a refined gentleman with considerable wealth of experience both in the legislative and executive arm of government. He has served in different capacities within and outside the state to understand what governance is all about. It is a blessing for us Bayelsans to have him as our governor, taking over from a man (Dickson) who has laid a solid foundation for the rapid development of state.”

Diri, the Peooles Democratic Party, PDP candidate in the November 16, 2019 Bayelsa State governorship election, took over the mantle of leadership on Friday, at expiration of Dickson’s second term in office.

This followed the Supreme Court ruling that nullified the victory of David Lyon of the All Progressives Congress, APC, who had originally won the guber poll.

Lyon received the Apex Court hammer on the ground that his candidature has been rendered invalid, with the disqualification of his running mate, Biobarakuma Degi-Eriemienyo, over certificate forgery.