The women wing of the All Progressives Congress, APC, 2023 Presidential Campaign Council has visited victims of flood disaster in Damaturu the Yobe State capital.

The team, led by wife of the presidential standard bearer of the party, Senator Oluremi Tinubu, made a cash donation of N20 million to the victims during the visit.

Speaking, Mrs Tinibu said that as mothers, they will continue to identify with victims of natural and man-made disasters and will always lend a helping hand to the less privileged.

She added that her team was in Damaturu, to commiserate with them over the natural disaster that has destroyed their means of livelihoods.

Emphatising with the victims of flood disaster, Senator Tinubu also prayed that Almighty God averts a recurrence in the future. 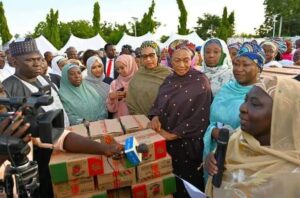 She made a presentation of N20 million as support to 400 identified victims of the flood with each expected to have ₦50,000 as support to enable them to recapitalize the small-scale businesses that they were engaged in before the flood disaster.

Food and non-food items were also presented to the victims through the Yobe State government. 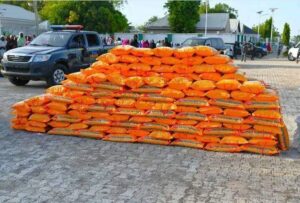 Appreciating the temp for it’s visit and support, the governor of Yobe State, Alhaji Mai Mala Buni, stressed that the donated cash and food items will go a long way in bringing succour to the victims.

The women’s campaign delegation, which has the wife of the APC vice presidential candidate, Hajiya Nana Shettima, as co-chairperson, also visited the palace of the Emir of Damaturu, Alhaji Shehu Hashimi Ibn El-Kenemi II, where they commiserated with the respected monarch over the recent demise of his son, Abba Sadiq Shehu Hashimi.

With Unity, African Enemies Can Be Defeated -Prof. Lumumba