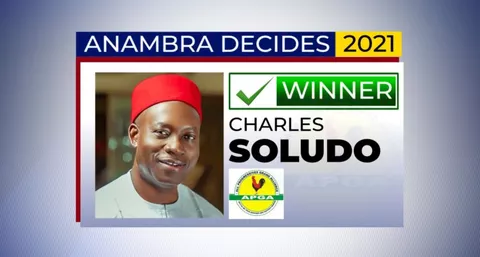 Finally, the chicken has come home to roost as the Independent National Electoral Commission, INEC, has declared former governor of the Central Bank of Nigeria, CBN, Charles Soludo, candidate of the All Progressives Grand Alliance, APGA, the winner of the November 6 Anambra State governorship election.

Declaring the result, INEC’s Returning Officer for the election and Vice Chancellor of the University of Calabar, Professor Florence Obi, said that the APGA candidate polled a total of 112,229 votes to defeat his closest rival and the candidate of the Peoples Democratic Party, PDP, who polled 53,807 votes.

The candidate of the All Progressives Congress, APC, Senator Andy Uba, came a distant third with 43,285 votes.

Eighteen political parties participated in the election and below is how the parties fared:

For The First Time, McConnell Recognises Biden As President-Elect