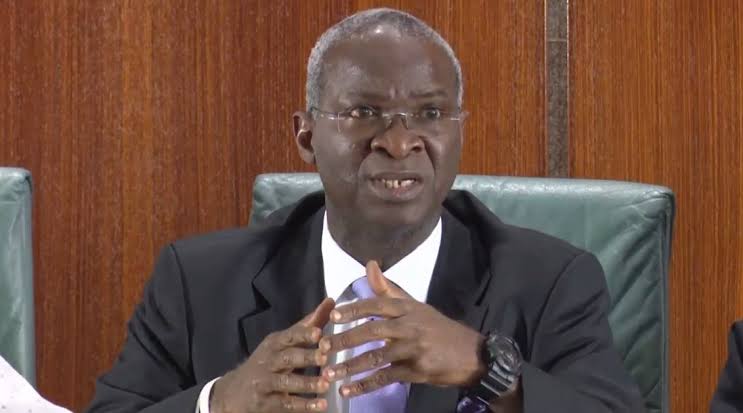 The Redeemed Christian Church of God, RCCG, has unreservedly apologised to the Federal Ministry of Works and Housing over its allegation of “false claims on the rehabilitation of Ife-Ifewara Road in Osun State,” saying that claim was based on a false premise.

Recall that the RCCG had petitioned the Senate, claiming that it had good reason to believe that the Federal Ministry of Works and Housing had paid N151.51 million to Messrs. Cartill Construzioni Nigeria Limited, for the rehabilitation of Ife-Ifewara Road, a work which the petitioner claimed was indeed carried out by the Church.

In the petition, dated 24th March, 2021, the Secretary to RCCG General Overseer, Pastor Niyi Adebanjo, claimed that the Church, after carrying out the rehabilitation of the road, learnt that the aforementioned company, which was awarded the contract since 2010 and had abandoned the work for over six years, had been paid by the ministry for the work, praying that the money be retrieved from the company.

In a response to the allegation at a public hearing before the Senate Committee on Ethics, Privileges and Public Petitions, the Minister of Works and Housing, Mr. Babatunde Fashola, SAN, said there was no proof to support the position of the petitioner, that an unjust claim was made by the contractor or paid by the ministry between 2016 and 2019.

Explaining that the road in question was a state road, Fashola added that the contract for the rehabilitation of the road was awarded by the Federal Government in 2010, as a parliamentary constituency project and domiciled in the budget of the Federal Ministry of Works and Housing, hence the intervention by the ministry.

Fashola clarified that both the award of and payment for the said contract were made between 2010 and 2011, four years before the Muhammadu Buhari administration came to being, explaining further that the contract was awarded on December 21, 2010 to the contractor in the sum of N662,760,771.75 with a commencement date of March 7, 2011 and completion date of November 7, 2011.

On the alleged sum of N151.51 million paid to the contractor, as claimed by the petitioner, Fashola explained that the payment made in two tranches, was statutorily made, adding that while the first payment of N99,414,115.76, made on March 31, 2011, represented 15 per cent of the contract sum, the second payment of N52,094,785, made on December 29, 2011, was based on submission of an Interim Statement.

The minister disclosed that the contractor only achieved 26.21 per cent project completion before abandoning the project, adding that the contract was as a result recommended for termination “for breach of contract,” after warning letters were served on the contractor, first on March 5, 2014 and final warning on June 15, 2015.

He noted that before any payment was made to any contractor, there has to be actual work done, measured and certified and recommended for consideration for approval for payment, and however, added that since the contract awarded to Messrs. Cartill had not been formally terminated, there has been budgetary provision for the road since 2010, except in years when it had zero budgeting, but the budgeted sum has never been processed since 2011 following the dismal performance of the contractor.

Fashola also told the Senate committee of plans by the ministry to sanction recalcitrant contractors by opening a “black book” for them, based on appropriate legal advice, declaring that “it is clear that contrary to the claims of the RCCG, the Contractor, Cartill cigeria Limited, did not make a claim for a refund for the cost expended on the rehabilitation of the road between 2016 and 2019.”

The former governor of Lagos State also informed that the ministry also did not make any such payment to the contractor.

He said, “The Federal Ministry of Works and Housing did not certify any work done on the road by the contractor between 2016 and 2019,” reiterating that the two payments made to the contractor were made in March and December 2011 respectively, “four years before the commencement of this administration in 2015.”

Insisting that the ministry neither consider nor grant approval for anyone to intervene on the road, Fashola, who said the RCCG did not seek or obtain such approval, further declared, “the Federal Ministry of Works and Housing is not liable to make any refund to anyone in respect of the road, which is the statutory responsibility of the Osun State government.”

He explained further that although the RCCG could be commended for the work done, there are procedures and processes for such interventions, whether on state or federal road, adding that the petitioner could have sought clarification either from the ministry of any other relevant agencies of government, instead of petitioning the Senate.

Responding, the petitioner, Pastor Adebanjo, expressed deep regrets for taking the matter to the Senate. He said that it was not, however, meant to embarrass the minister or his ministry, but in the spirit of fighting corruption by ensuring that the money paid to the contractor was retrieved and paid to the Federal Government coffers.

Realising that his claims in his petition had no factual proof, and as noted by a member of the Senate Committee, who advised that he should do the needful on account of available evidence, Adebanjo said, “For the fact that the Ministry of Works deserves an apology, and because the whole world is listening to us, I tender that apology unreservedly before this Senate Committee.”

In his submissions, the committee chairman commended Fashola for coming personally, “as always when we invite you” to respond to the petition and throwing more light on the whole issue, adding that other officials of government should borrow a leaf from him.

Other committee members also commended the minister for his diligence and commitment to every assignment pertaining to his responsibilities, noting with satisfaction that there was move by the ministry to bring recalcitrant contractors to book.

The minister was accompanied to the hearing by some directors, Special Advisers and other top officials of the ministry.