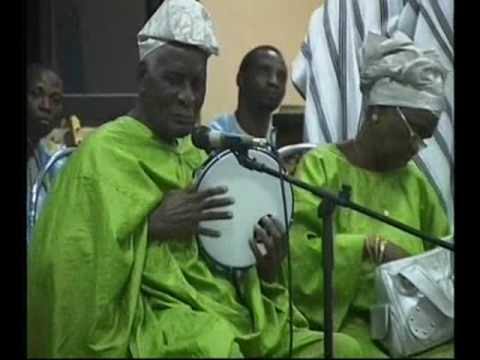 By Tunde Odesola
Sight, the king of the five senses, is superior to touch, taste, hearing and smell. But sight is inferior to insight. I contemplated this truth last week when I interrogated the essence of a man whom life blinded with a vicious uppercut. But, instead of lying floored on his back in defeat, he rose up to live and die on his feet.

Subsequently, the little jewel from an Owo ruling house in Ondo State dropped out of school and began to wander in search of kindness in a cruel world, earning along the way, a curious nickname, Kokoro (Insect), which probably reflected his peregrination from his Owo hometown to Ilesa, Osogbo, Ede, Ibadan and ultimately, Lagos, where he found meaning to his existence and lived 62 years of his almost 84-year life.

When the wicked act of his stepmother stopped him from furthering his education, Kokoro embarked on the path of self-rediscovery. He knew he was on a mission to preach love, unity, kindness, honesty, courage; peace, perseverance, hard work, godliness and hope to humanity. Getting a sound education was, clearly, a means through which Kokoro could have achieved his mission on earth. Ascending the throne of his forebears was another. But blindness slammed the door shut on both options because Braille then wasn’t a popular form of writing he could afford and no kingmaker would enthrone a sightless man.

Quite unlike Nigeria’s Presidency, Kokoro set forth at dawn, evolving a solution to the stumbling block against his desired success by mastering how to sing and play the drums, ultimately specialising in the tambourine. He didn’t just sit down in Owo to bemoan his tragedy or fold his arms and watch the days go by – like the Federal Government shilly-shallied on coronavirus before imposing travel bans; Kokoro was restless – moving from one town to the other, looking for answers to the riddles of his life.

In contrast to the General Muhammadu Buhari administration, Kokoro was an inspiration, whose life struggles inspired the popular novel, “The Drummer Boy,” by Cyprian Ekwensi. Kokoro worked with two of Nigeria’s departed musicians, the evergreen Bobby Benson and the legendary Victor Olaiya, yet he didn’t abandon the recipients of his message who lived on the street like the Buhari-led Federal Government shunned the dead and living victims of the Abule Ado gas explosion around FESTAC Town in the Amuwo Odofin area of Lagos, on Sunday, March 15, 2020.

It’s terrible that none of the politicians raised by Lagos since 1999 has visited Abule Ado to commiserate with the state in her moment of need because none of them wanted to be seen as doing the right thing which Buhari failed to do. “Do not outshine the master,” is the first law of power recommended in “48 Laws of Power” by Robert Greene for survival in a cutthroat world.

Kokoro is receptive to learning and change. He didn’t marry more than one wife, having experienced one of the dangers of polygamy which culminated in the loss of his eyes. The Buhari government is intolerant to change.

Unlike the leadership of the House of Representatives, symbolised by the Speaker, Femi Gbajabiamila, Kokoro believed in the country, invested his time and talent in it, and never preferred the allure of foreign land to the ricketiness of Nigeria. He never exhibited preference for foreign cravings over Nigerian foods, music, environment and culture. Being a proponent of Nigerian music, people and spirit, Kokoro wouldn’t have gone to Dubai to wax an album or to celebrate his mother’s birthday. Kokoro was a dyed-in-the-wool Yoruba man who would choose buba, sooro and agbada over bespectacled three-piece suits, false marxist beard, white hair of unintelligence and fake populism – all legislative euFEMIsms for deceit.

The minstrel would not doublespeak like the House of Representatives that preaches love for made-in-Nigeria goods but ordered 400 brand new Toyota Camry cars when a local automobile plant, Innoson, begs for patronage.

As a sad prince, he probably could have abandoned the country for Benin, Togo, Ghana or elsewhere, but he chose to sink or swim with Nigeria, celebrating her successes and failures. Kokoro wasn’t a prodigal son. When he travelled abroad, Aderounmu sang the dignity and honour of Nigeria, propelling his audience to give out money to him, which he brought back into the country to spend. Unlike Gbajabiamila, Kokoro didn’t pack money from the country and headed to Dubai on a lavish birthday spending spree, happy that the sightless eyes of the Economic and Financial Crimes Commission weren’t on sight.

In one of his online videos, I watched Kokoro sing for his wife and kids in his poor house. He had a happy family. His kids danced to his music while his wife listened. He was content. He wasn’t a woman beater like that crawly maggot in the legislative chamber who ABBOminably beat up a young mother at a sex toy store, making her life hang by the CLIFF.

Kokoro didn’t reap where he didn’t sow. He played his music for the high and mighty at highbrow concerts, and also for the low and little on the streets, making people happy, think, repent and become better persons. People appreciated Kokoro for his art, passion and belief as some gave him alms while some sought his harm. Kokoro would have played to the delight of home-bound students in front of the 79-year-old Reagan Memorial Baptist Girls’ Secondary School, Yaba, but he would neither have coveted having the school named after him nor thought of having the remodelled Reagan Memorial Baptist Nursery and Primary School, Yaba, changed to his name – for robbers in his time were tied to stakes and shot.

Though blind, Kokoro would know that it was honourable to preserve the legacy and memory of American Baptist missionary and philanthropist, Miss Lucile Reagan, who established the school to nurture girls to womanhood.

Born in 1897, Reagan, a native of Texas, arrived at the Lagos port on October 12, 1921 to start an awesome missionary career that watered the flourishing Baptist Academy, Lagos and birthed the Yaba Baptist Church, Lagos, Baptist hospitals, among countless other enduring legacies across Nigeria, mastering the Yoruba and Hausa languages in the process. Reagan died on July 12, 1937 after being stricken by Yellow Fever and was buried in Ogbomoso, Oyo State. Though Kokoro never saw Reagan because he arrived Lagos blind, he would have known it is evil to attempt to erase the memory of such an inspiring character and replace it with that of an undeserving, average politician.

Kokoro was ubiquitous, but he wasn’t the greedy Jagabat, whose pretentious wife REMInisces about her fair skin without recognising the virtues of a fair character.

Though he had an album to his credit and was always on the street singing to earn a living, Kokoro could have died without a roof over his head if not for the Lagos State Government headed by Babatunde Fashola that built him a bungalow in Shasha, Lagos.

Unlike Nigeria’s political leadership, Kokoro showed his irrevocable commitment to modesty in these words, “The right place for my music is here with poor people on the streets of Lagos. I’m not a recording artist, though I did once record an album; my aim is to sing directly to people in the street, and give the message of my song to them face-to face. My life is simple, I’m a minstrel, a beggar. I don’t care about what others do.”

Sight is truly inferior to insight.

Sleep on, Kokoro, the unsung songster.

•Odesola, a joutnalist writes from the United States of America and can be reached via: tundeodes2003@yahoo.com

Ondo 2020: The Lies, Hypocrisy And Uncouthness Of Akeredolu’s Three Years In Office