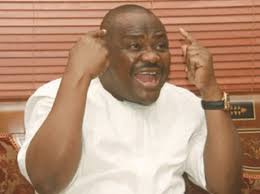 Rivers State Governor Nyesom Wike, has blasted governors and other elected public officials on the platform of the Peoples Democratic Party, PDP, Defecting to the All Progressives Congress, APC, describing them as treacherous.

In a statement titled: ‘Governors, Others Who Defect from PDP to APC Lack Conscience,’ and signed by his media aide, Kelvin Ebiri, in Port Harcourt, on Tuesday, Wike was quoted to have said this during the flag off of the Woji-Aleto-Alesa-Refinery road and bridge with spur to the East-West Road at Woji town.

Wike said, “People who could not win an ordinary election. The party used technicality and went to court and got victory. Now, they say they are leaving the party. Hopeless, shameless human beings. People who have no conscience.”

He also took a swipe at the former Director General of Nigerian Maritime Administration and Safety Agency, NIMASA, Dr Dakuku Peterside, for allegedly lying about the N78 billion Federal Government refund to the state.

“So, the bank has to come in to take it and discounted it, because the Federal Government is going to pay them back in the next four years. What Rivers State government got was N52 billion out of N78 billion. But, in principle, N78 billion was approved, but was there any cash? No cash to back it up.”