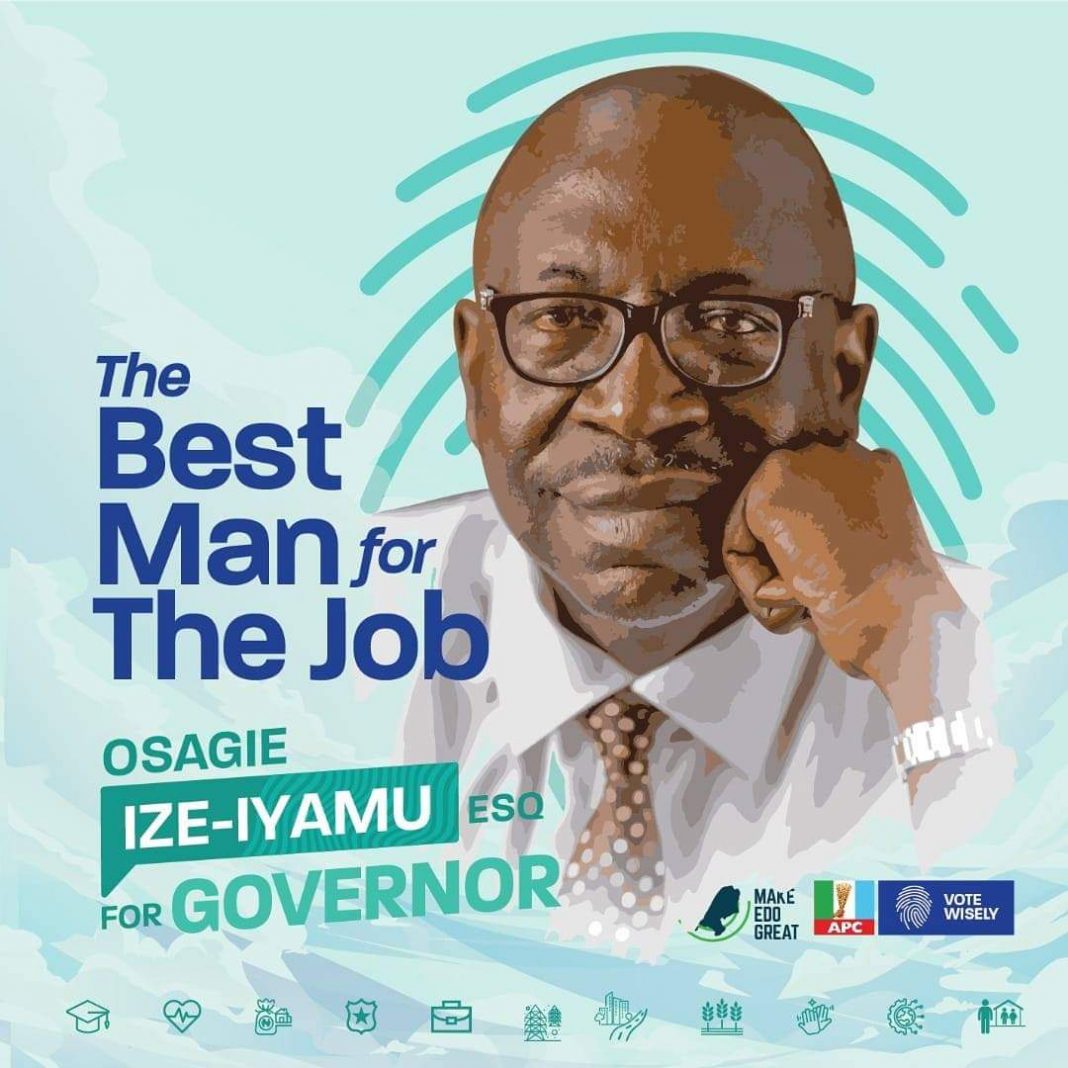 As God has divinely decreed, the people of Edo State will go to the poll on Saturday, September 19, united with one voice to elect a new governor to administer Nigeria’s Heartbeat.

The 2020 Edo State governorship election is expected to hold under an atmosphere of humanity, despite the fact that the environment is highly charged. There is no doubt, whatsoever, that Edo people are ready to troop out to cast votes, defend same without violence, and ensure a free, fair and credible election of a new governor just as the Independent National Electoral Commission, INEC, security agencies, non-governmental organizations, NGOs, and other authorities have assured.

Ahead of this weekend’s exercise, especially since the commencement of political campaigns that brought party primaries, a lot of threats and actions have been witnessed, raising fears of a violent election.

Such fears with basis have been allayed, however, when 14 candidates in the election, including the two known contenders, signed a peace pact that reinforces the fact that only one winner will emerge from the election even as losers must dignifiedly accept defeat.

The popular and formidable candidate of the All Progressives Congress, APC, Pastor Andrew Osagie Ize-Iyamu, PAOI, who gave his opponents bear hugs at the ceremony in Benin City, stated his belief and expectation very clearly. He commended the Benin monarch, Oba Ewuare II, for initiating the peace process.

He said, “We will do all our best to ensure that the election is peaceful; we support free, fair and credible election. We believe that is the only way we can sustain our democracy.”

In the case of re-election seeking candidate of the Peoples Democratic Party, PDP, Governor Godwin Obaseki, who is battling a gale of resignation of cabinet members, aides and party leaders; and who is asphyxiating under the ransom demand of N5 million balance promised 192 PDP ward chairmen, his fate became much more pronounced, after his lacklustre performance at the Channels TV live debate on Sunday.

Viewers watched but could not help an unprepared Governor Obaseki as Ize-Iyamu harassed, teased, taunted and trounced him.

Obaseki, a man who is fond of falling asleep publicly too often, could not provide or grasp the facts of his fallacious 157,000 job creation fiction and other bogus claims of his violent and disastrous government of about four years now, when he stood on his feet for once.

Where are Obaseki’s jobs? “I am sure he is not going to misplace the appointments he is making now as jobs. I know, in the past one month, he has appointed over 2,000 people as SSAs on social media. Those are not jobs. When you say you have created jobs, in what area? We know, for example, that there is a glaring vacancy in the teaching profession and every school we went to, they practically had no teacher. Hospitals have no doctors. It is sad that the government of Obaseki falsifies figures,” Ize-Iyamu interrogated.

With Obaseki’s cowardly withdrawal from another debate on Wednesday by Arise TV, coupled with the controversy an alleged criminal falsification of certificates has yoked upon him and his running mate, Hon. Philip Shaibu, his looming defeat on Saturday has become a fait accompli, pushing his paranoia and violence following his public rejection, like King Saul in the Bible.

In a clear example of modern-day benefactor in politics, Samuel, a prophet of God, anointed Saul, the son of Kish, to the kingship of Israel after elders rejected the seer’s two sons, he had appointed judges, for not walking upright.

“They turned aside after dishonest gain, took bribes, and perverted justice.” I Samuel, Chapter 8, Verse 3.

Like Governor Obaseki, Saul had his kingship on a golden platter. But in just three years of his kingship, Saul committed so much broken promises, impatience, ingratitude, greed, intolerance, sacrilege, voodoo, abomination, corruption, looting and evils that made him lose the establishment of his kingdom forever.

Verses 13 and 14 of Chapter 13: “And Samuel said to Saul, ‘you have done foolishly. You have not kept the commandment of the Lord your God, which he commended you. For now, the Lord would have established your kingdom over Israel forever. But now your kingdom shall not continue. The Lord has sought for himself a man after His own heart, and the Lord has commanded him to be commander over his people, because you have not kept what the Lord commanded you.”

The rest of the life of Saul documented violent struggles, just like Obaseki, to retrieve his long-lost mantle from David and his peace of mind. Indeed, before Saul, his three sons, armourbearer and all his men died same day, he suffered insanity.

Watching Obaseki and Shaibu on TV daily, their campaign is riddled with lies, unbelief and emptiness that make the electorate to wonder how they ascended the throne in the first place.

It is about Oshiomhole, Oshiomhole and Oshiomhole; even when Edo SSG and Obaseki’s campaign director-general, Mr Osarodion Ogie, is nowhere to be found at PDP campaign grounds. It is about Oshiomhole, even though Pastor Andrew Osagie Ize-Iyamu is Obaseki’s formidable liquidator. From working for Oshiomhole’s government free-of-charge (even when he received commission for MoUs, contracts etc), to helping Oshiomhole to raise his election funds, (even when he contributed just a miserly N100,000), to Shaibu introducing Oshiomhole to politics; (even when Shaibu lost his first political election), or to Shaibu risking his life for Oshiomhole (even when Shaibu actually benefited by the first election he won), it’s all lies, lies and more lies.

But the issues of this election remain unanswered. Why did Obaseki misgovern Edo State with less than nine (9) elected lawmakers, out of 24, after imposing the Speaker? What has Obaseki achieve with huge loans he collected against Edo State’s future? How does the appointment of about 3,200 social media SSAs translates to 200,000 pre-election promised jobs? How does the facilitation of N700 million land for establishing a private-driven N10 billion modular refinery translates to total ownership by Obaseki’s Edo State government? How does the arbitrary shutting down of many institutions in Edo State and refusal to employ teachers translate to educational development, etc?

As Nigeria’s foremost democrat, APC National Leader and former Lagos State governor, Asiwaju Bola Ahmed Tinubu stated that Obaseki should be concurrently rejected, not only for his impeachable undemocratic offences, but also for his ingratitude and greed against those who suffered and ‘died’ in the course of his 2016 electoral success.

Tinubu said, “He (Obaseki) does not deserve any democratic ballot paper. Don’t vote for him, I appeal to all of you.”

The bold message for Saturday, 19th September 2020 is: reject the PDP; reject its ingrates, the greedy Governor Godwin Obaseki and violent Deputy, Hon. Philip Shaibu. Like Saul, God has rejected Obaseki and Shaibu. Edo State people have also rejected him.

Vote Pastor Osagie Ize-Iyamu of the Broom, APC, and The Simple Agenda to move Edo forward. The future is now.

•Ebhuomhan, a multiple award-winning journalist from Edo State, writes from Abuja; and can be reached at: usie007@yahoo.com or 08037204620.