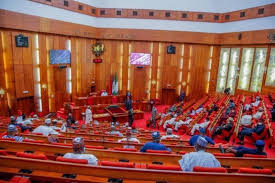 The upper legislative chamber of the National Assembly on Tuesday disclosed that its Committee on Privatisation and Commercialisation is ignorant about the planned arrangement by the Bureau of Public Enterprises, BPE, to concession or put for outright sale some national assets in the country.

Committee Chairman, Senator Theodore Orji, while addressing newsmen said the BPE accused its Director General of refusal to give the committee adequate information about their activities.

He said the Committee will request for all relevant documents regarding the sale and concession of the government-owned assets.

However, Orji said that the Committee was not against a situation where capable Nigerians buy the national assets so far they would show patriotism in handling it.

He said, “The position of the Senate Committee on Privatisation is that we are not aware of the planned arrangement by the Bureau of Public Enterprises to either concession or put for outright sale some national assets in the country in order to fund the 2021 federal budget.

“During the BPE budget defence before my committee, I complained bitterly that the relationship between our committee and the BPE has not been very cordial due to the behaviour of the DG, BPE.

“This is a man that if we call him on phone, he would not answer and if we send him a text message, he would not reply. How then does he want us to communicate?

“There should be a synergy between the Senate or its Committee on Privatisation and the BPE because that is the major parastatal that we oversight.

“I also believe that the Senate Committee on Privatisation should be carried along when most of the arrangement to either sell or concession our national assets are being made so that we would be aware.

“Let me assure Nigerians that there is no member of the Senate Committee on privatisation that knows about all these things, except they read it on the pages of newspapers.

“When the DG, BPE came to defend his agency’s 2021 budget proposal before us, we asked him why he didn’t invite us at least as witnesses, he merely apologised. This is neither the first time nor the second time that such a thing would happen.

“When it happened the first time, I accosted him and asked him why he prevented us from carrying out our statutory job.

“However, we felt this is the best time to open up so that tomorrow, Nigerians would not blame the senators of being part of the sale of our national assets. We know nothing about the entire transactions as a committee.

“We want to assure Nigerians that the committee will carry out its functions by summoning the DG, BPE. We would demand for all the documents relating to the entire transactions. We would ascertain whether due process were followed. We would also look at the amount that the BPE put up the assets for either outright sale or concession.

“We would scrutinise the papers to see whether they are fair or ridiculous amounts because what Nigeria as a nation needs now is money.

“A good example is the situation we are experiencing with the paper mills. None of them is working again today because I don’t think the people who bought them are capable.

“If Nigerians who are capable of managing our national assets are interested, let us sell to them at a reasonable price so that nobody would feel cheated.”

Orji said that apart from summoning the DG, BPE, his committee will also pay surprise oversight visit to ascertain the various locations of the assets being put up for sale or concession to ascertain their current state.

He said, “We would go there for on-the-spot assessment in company with consultants and we would send our own report to the appropriate quarters to compare and contrast.

“Apart from the latest national assets listed by the BPE for concession or sale in 2021, our committee had also listed those that had been done in the past with a view to resisting the entire transactions and the process adopted in putting them up for sale or concession.

“Some of them are the Transcorp Hilton, the power plants and the assets in the oil and gas sector that had been concessioned.”