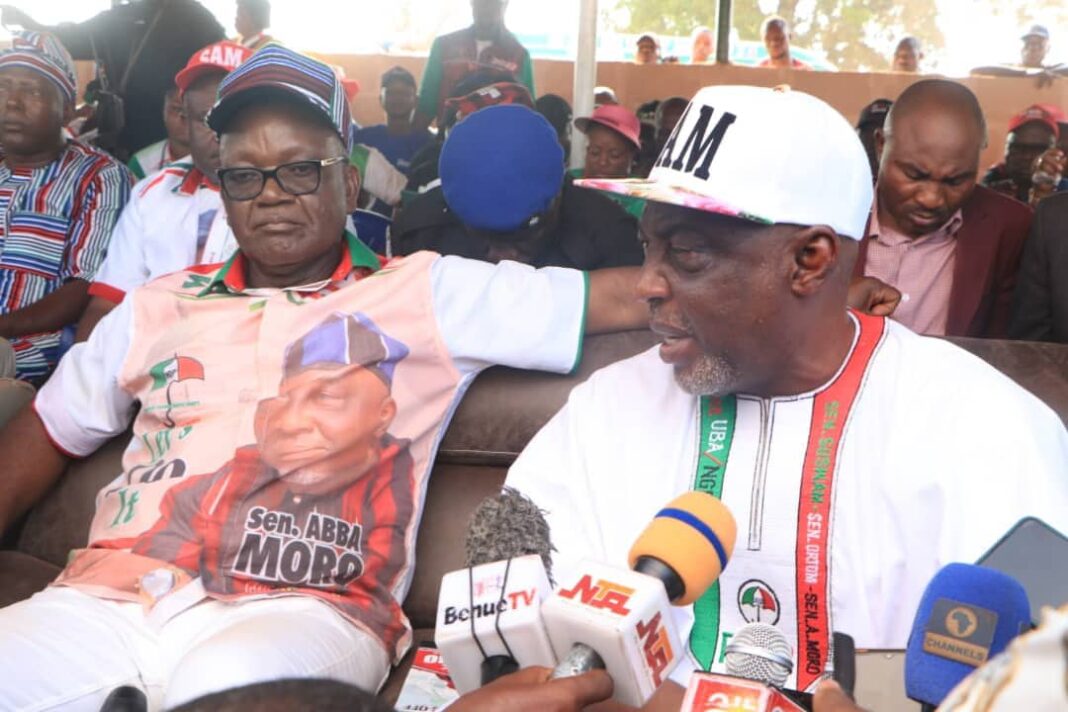 …As Sen Moro Distances Self From Comments On PDP Crises

Benue State Governor Samuel Ortom has assured the people of Benue South senatorial district that the continuity of the Peoples Democratic Party, PDP, administration in the state will further work for the improved conditions of the state.

The governor spoke on Monday, December 5th, 2022, at the flag-off of the PDP senatorial campaigns in Benue South, just as Senator Abba Patrick Moro, dismissed comments credited to him on the PDP crises at the national level.

The campaign, which was held at the Pavilion Square in Oju Local Government Area, attracted thousands of party supporters from the nine local government areas of the zone.

Governor Ortom commended the people of Benue South for their commitment to the party and promised that those elected on the platform of the party will continue to do their best to bring development to the state. 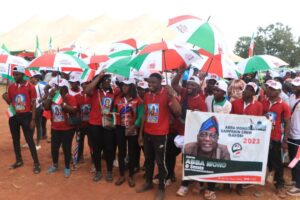 He said, “You have done us well, you have given us support and the only thing we can pay back with is to ensure that we work to ensure that Benue State is better and that is what we are doing.”

Expressing satisfaction with the patriotism and commitment to the PDP by Benue South, Ortom reiterated that the party was one indivisible platform in the state that was committed to winning all its elections.

He said, “Let me tell you, PDP is a serious business in Benue State. By the grace of God, we are going to win all our elections. We are one indivisible body that is committed to the winning of our party, the PDP, because the All Progressive Congress, APC, has failed this nation.”

He reaffirmed that despite the challenges and paucity of funds, his administration remained committed to meeting its obligations to the people.

The governor, who decried that the state has been marginalized despite his administration’s commitment to development, enjoined the people to vote for PDP candidates, who he noted were committed to the collective good of the state.

In his speech, the senator representing Benue South senatorial district, Comrade Abba Patrick Moro, who is seeking re-election as the PDP senatorial candidate, while reeling out his achievements, also dismissed media reports on the crises in the PDP at the national level credited to him.

He said, “I believe that the governor as the leader of the party, has the capacity to resolve issues within the party in Benue State and even as a leader in the G-5, he has the capacity together with his colleagues to ensure that the right thing is done and all parties to the crisis in the PDP do the needful to make sure that we go into 2023 as united forces of PDP to win the election.

“I will never assume the duty of the leader of the party in Benue State and I have restrained myself from commenting on the crisis in the PDP, believing that our leaders know the right thing to do at the appropriate time.”

He said he never made any comments, either directly or indirectly during the inauguration of his campaign council as credited to him.

He added, “I want to say here that, whatever is happening at the national level is left for those people who are playing national politics to resolve the matter. And if they don’t resolve it, I will call you and I will inform you and ask you what direction we will go.”

Senator Moro disclosed that he had sponsored 13 bills in the Senate, some of which include, a bill canvassing for the establishment of the North Central Development Commission, Rotation of Power among political blocs and Local Government Autonomy, among others.

The senator representing Benue North-East, Dr. Gabriel Suswam, in his goodwill message said that he had come to give solidarity to Senator Moro, who he described as a “prominent son of Zone C, a grassroots politician and a voice that cannot be ignored in the Senate and politics of Nigeria.”

The deputy governorship candidate of PDP in the state, Sir John Ngbede, in a brief remark on behalf of the PDP governorship candidate, Engr Titus Uba, noted that the PDP was sending a balanced team to the National Assembly and tasked the people to collect their Permanent Voters Card, PVCs, and vote en masse for PDP candidates in the polls.

The acting state chairman of the PDP, Hon Isaac Mffo, who presented the party’s flags to candidates of the party in the zone, affirmed that the “PDP is an inclusive political platform,” and charged the candidates to carry everyone along in their campaigns.

Earlier, Director of Benue South senatorial campaigns, Dr. Elijah Adakole, stated that with the track record of performance of Senator Moro in the areas of health, infrastructure and education, the people of the zone were ready to re-elect him and vote for all PDP candidates.

The chairman of the occasion, Elder Christopher Abah, and chairlady, Mrs. Ene Edache, in their separate remarks pledged their readiness to mobilize support for all PDP candidates.