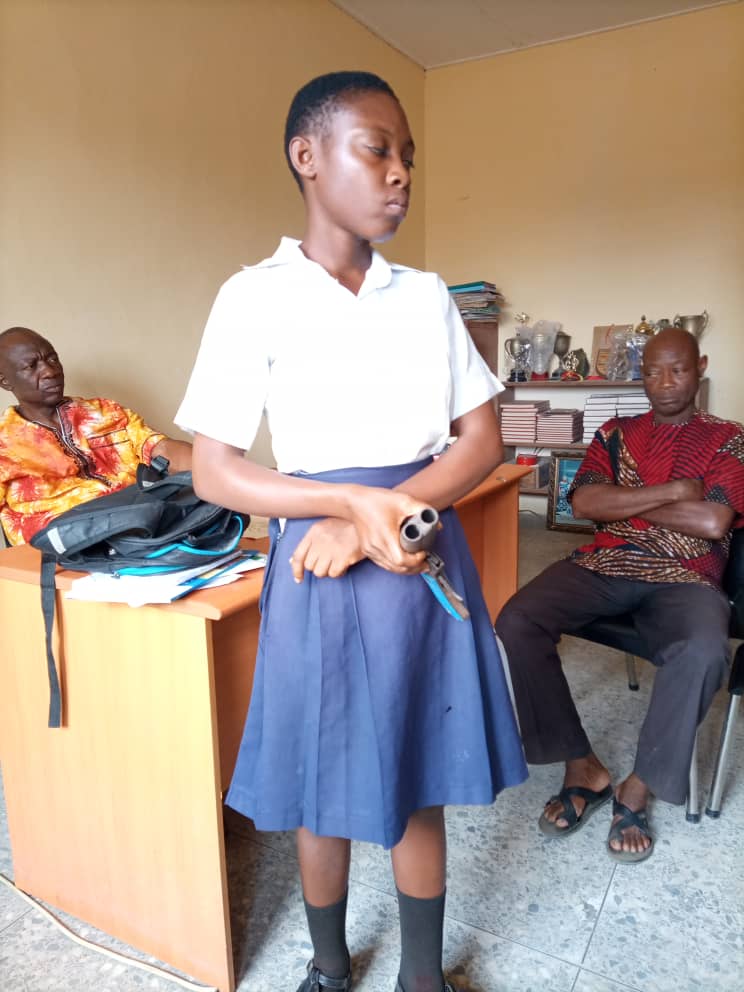 Parading the school girl alongside 12 other alleged cultists, Kidnappers and armed robbers, the state Commissioner of Police, CP, Sikiru Akande, told newsmen that the suspects were arrested from different locations in the state.

CP Akande, who mentioned the student’s name as Promise Idorenyin, averred that the gun found on the female student was made available to her by her 38-year-old boyfriend, Okon Effiom Edet, stressing that contrary to reports in various social media platforms and newspapers, the female suspect did not target her teacher; adding that the locally made pistol had no ammunition

The Police Commissioner said, “The 17-year-old girl, an SS II student of Community Secondary School, Ikot Ewa, Akpabuyo, had in her school bag, a locally made double barrel pistol, which was discovered by the Principal of the school.

“The suspect admitted that the said firearm was given to her by her boyfriend, Okon Effiom, of Abasi Effiom village in Akpabuyo Local Governemnt Area of the state. Discreet investigation is ongoing, and the suspects will soon be handed over to the appropriate authority for prosecution.”

He said that the police recovered 57 rounds of 7.6mm live ammunition, 25-feet armoured cables, eight parcels of weeds suspected to be Indian hemp, one locally made double barrel pistol, three locally made pistols with three live cartridges, charms, amulets, amongst many other items.

Speaking, during a brief chat with newsmen, the female student stressed that the locally made pistol belonged to her boyfriend, adding that her parents were aware of her relationship with the man.

She further informed that her parents had okayed the relationship, but however insisted that she never planned to shoot her teacher.

The school girl said, “My parents are aware of my relationship. At times, he sleeps in our house. He helps me in my school matters. He told me to take the gun to the blacksmith to fix it.”

She also confessed to being a member of a female cult group operating in the school by the name of Skyqueens, adding that we however does not hold any position of responsibility in the group.