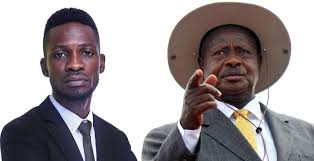 The people of Uganda came out en masse to exercise their franchise in the country’s general election, presidential and parliamentary, on January 14, 2021.

The main focus was on the presidential election, in which the incumbent President Yoweri Museveni of the National Resistance Movement, NRM, slugged it out with his major challenger, the candidate of the National Unity Platform, NUP, Robert Ssentamu Kyagulanyi, aka Bobi Wine.

At the end of voting by the electorate in the presidential poll, which had nine other candidates, Uganda’s Electoral Commission, chaired by Simon Mugenyi Byabakama, announced Museveni, the long-time Ugandan leader, as the winner, having garnered a total vote of 5.85 million, 58.64 per cent of total votes cast, leaving Kyagulanyi with 3.48 million votes, 34.83 per cent.

However, the 38-year-old presidential candidate of NUP was quick to oppose the declaration of the electoral body, insisting that the results released were fake, and therefore, not a true reflection of the will of Ugandans. Bobi Wine described the election as the worst ever in the history of Uganda and urged the people to reject the outcome in its totality.

According to Wine, a ghetto songster turned politician, who, obviously, has become the new face of Uganda’s opposition, since he won election into the Parliament in 2017, “We are the real winners of this election and therefore what the electoral commission announced has nothing to do with the real election that took place. I can call on all Ugandans to reject the announcement that has been made by the electoral commission…to reject them with the contempt with which it deserves.”

The young legislator, placed on house arrest together with his wife, after the election, said his team was considering all peaceful, non-violent and legal options to contest the results and reclaim his stolen mandate.

Countering Wine’s position, 77-year-old Museveni, a former freedom fighter, now seen as a tyrant by many, dismissed the allegations of fraud, maintaining that the election is the “most cheating free,” since 1962, when the country attained independence.

Museveni, who has been in power since 1986, 35 years ago, and one of Africa’s longest-serving rulers, warned that “if anyone tries to disrupt our (Uganda’s) peace, we shall deal with them decisively.”

The run-up to the polls was reportedly marked by bloody campaigns, with security agents ferociously breaking up opposition rallies, citing COVID-19 control measures. In November 2020, the arrest of Wine sparked a wave of protests in several parts of the country, leading to the killing of dozens of people from the bullets of trigger-happy security men.

More than 500 people seen as supporters of Wine were said to have been arrested for their involvement in the demonstrations. The election was thus believed to have held in an environment of intimidation and fear.

Apart from an African Union, AU, mission and East African Community, no major international group monitored the voting process. The United States, US, embassy canceled a diplomatic observer mission after over 75 per cent of its accreditation requests were denied by the electoral body. The European Union, EU, also did not deploy an observer mission. It noted that excessive use of force by the security agencies had tarnished Uganda’s electoral process.

The EU was irked that nothing seemed to have changed as none of the 30 recommendations made by the observer mission it sent to monitor the previous election held in 2016 was implemented. Key among the recommendations included reforms to make the election umpire more autonomous, elimination of undue application of force by the armed forces and more transparency in the tallying of results.

A Germany-based stalwart of the Peoples Democratic Party, PDP, from Akinyele/Lagelu federal constituency in Oyo State, Nigeria, Hon. Olayinka Oladimeji Segelu, is one of many African youths who feel sad that the just concluded presidential election in Uganda was rigged against a young man with great zeal to emancipate his people.

Describing the election as a complete charade and the most fraudulent in the history of Africa, Segelu, the Managing Director/Chief Executive Officer of YSEG Hotels and Suites in Ibadan, wondered why African leaders have wickedly decided not to give youths a chance in the affairs of governance on the continent.

The former Personal Assistant, PA, to former Speaker of the House of Representatives, Rt. Hon Dimeji Bankole, said, “I am a member of Bobi Wine campaign team from Nigeria. I belong to virtually all of his campaign platforms/groups on social media, where we did our best as youths to position him for victory to kick out the old civilian despot, who wants to remain in power perpetually.

“There is no gainsaying the fact that many civilian and military dictatorships have fallen, heralding the entrenchment of rule-of-law-based governance systems symbolized by constitutionalism and constitutional government in Africa, it is however unimaginable and unthinkable that we still find ourselves in a situation, where political leaders in the continent are allowed to so easily and freely continue to manipulate elections to perpetuate themselves in office.”

Segelu, a PDP aspirant for the House of Representatives in 2015, further stated, “It was obvious prior to the presidential election that Ugandans were eagerly yearning for change and they saw Bobi Wine as a good material for their much desired change. Hence, they stood solidly behind him, despite the victimization and intimidation from Museveni’s police and military forces. It could be seen that the people were unanimous in their support for a young man, who has demonstrated unflinching courage, doggedness and tenacity of purpose, in the fight to liberate Uganda from the clutches of oppression in the hands of a ruthless and dictatorial president.

“What could have prompted Museveni’s evil decision to order the shutting down of all the important mediums and channels of communication – internet, Facebook, etc, – in the country, if not to allow for easy manipulation of the election results in his favour? The people of Uganda must collectively reject the charade called election. We shouldn’t allow this kind of despotic tendency of our African leaders to continue. Enough is enough!

“Is it that the African youths are not useful or African elders have simply just decided not to trust today’s youths with the responsibility of governing their countries? Museveni was actively involved in the rebellions mounted to conquer the ruthlessly brutal government of Field Marshal Idi Amin (1971 – 1979). Idi Amin had declared himself President for Life amongst other self-bestowed titles. In 1973, at age 29, Museveni left the mainstream opposition to form the rebel group Front for National Salvation, FRONASA, with which the battle to topple Idi Amin was fought. It was Museveni’s National Resistance Army, NRA, that likewise led the guerrilla wars that brought down the repressive government of Milton Obote (1980 to 1985) before he eventually became Uganda’s President in 1986. Obote had earlier been Prime Minister from 1962 – 1966 and President (1966 – 1971).

Segelu added, “One begins to wonder how the same President Museveni that played key role in chasing out previous oppressive and draconian governments in Uganda has refused to relinquish power. Instead, he now cruelly rules Uganda with an iron fist – governing through the use of intimidation, terror and suppression of civil liberties.”

The YSEG Hotels and Suites boss asked: “Why is it difficult for African leaders like Museveni to emulate Nelson Mandela of blessed memory? Mandela, an anti-apartheid revolutionary and activist fought for the establishment of multiracial democracy in South Africa, during which he was imprisoned for 27 years. He came out of prison to become the first black President of South Africa. After the completion of his first term of five years, he honourably stepped aside even when South Africans wanted him to continue.

“Let me ask: What is the AU doing about the violent roles of our security operatives in our electoral process? Is the international community not going to intervene in what is happening in Uganda? Who will rescue Africa and Africans from the stranglehold of our dishonest elders in this continent?”

Commissioner for Youth Political Participation, Pan-African Youth Union, PYU, Amb. Oladele Nihi, described the outcome of the Uganda election as a slap on the faces of African youths.

Nihi, in a statement, called on African youths to rise up to fight against what he called “recycled leadership and analogue democracy.”

He said, “History was made in Uganda on January 14, as the world watched the outcome of the country’s presidential and parliamentary elections. And as predicted by majority of election observers, the voices of the people were submerged in a total eclipse of political hazard, in which the country’s preferable candidate, Bobi Wine, became a victim. African youths should come awake and take their destinies in their hands, by putting an end to recycled leadership, and analogue democracy.”

While speaking on the outcome of Uganda’s election, the United kingdom, UK, government, through its Minister for Africa, James Duddridge, MP, said, “The UK government welcomes the relatively calm passing of the elections in Uganda and notes the re-election of H.E. Yoweri Museveni as President. Many in Uganda and beyond have expressed concerns about the overall political climate in the run-up to the elections as well as the electoral process. It is important these concerns are raised, investigated and resolved in a peaceful, legal and constitutional manner. We ask that all parties, including the security services, but also all of Uganda’s political movements, act with restraint to ensure the peaceful resolution of disputes.”

Giving a frown of disapproval on the tense atmosphere in Uganda, the US, through its Department of State spokesperson, Morgan Ortagus, stated, “We are deeply troubled by the many credible reports of security force violence during the pre-election period and election irregularities during the polls. We strongly urge independent, credible, impartial, and thorough investigations into these reports and that those responsible be held accountable.

“We urge all parties to reject violence and to use constitutional and legal means to address complaints. We call upon the government of Uganda to respect freedom of expression and the right to peaceful assembly, and to hold accountable members of the security forces responsible for violence and abuses. We reiterate our intention to pursue action against those responsible for the undermining of democracy and human rights in Uganda.”