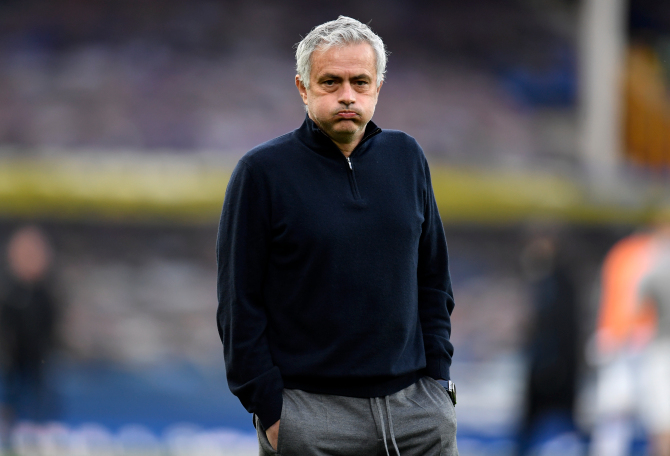 …Hours After Joining ESL; One Week Before EFL Cup Final

Tottenham Hotspurs Football Club have parted ways with Jose Mourinho amid a horror 2021.

Academy coaches, Chris Powell and Ryan Mason are set to take over as interim bosses until the end of the season.

Fifty-eight-year-old Mourinho has been under increasing pressure and has now been given the boot by Daniel Levy – just six days before the Carabao Cup final clash with Manchester City.

The sack notice, which was contained in a brief statement on the club’s website, stated, “The club can today announce that Jose Mourinho and his coaching staff Joao Sacramento, Nuno Santos, Carlos Lalin and Giovanni Cerra have been relieved of their duties.”

Chairman Levy added, “Jose and his coaching staff have been with us through some of our most challenging times as a club.

“Jose is a true professional, who showed enormous resilience during the pandemic.

“On a personal level, I have enjoyed working with him and regret that things have not worked out as we both had envisaged.

“He will always be welcome here and we should like to thank him and his coaching staff for their contribution.”

The Portuguese boss had replaced Mauricio Pochettino in November 2019, signing a contract until the end of the 2022-23 season.

But ‘the Special One’ has now been sacked more than TWO years early, as Spurs’ slide continues.

The club confirmed that former midfielder, Ryan Mason would be in charge of Monday’s first-team training session in the absence of Mourinho. Mason is expected to takeover as caretaker manager alongside Chris Powell until the end of the season.

A permanent replacement for the former coach of Chelsea and Manchester United, Mourinho, is expected to be named in the summer.

Top in the list of probable contenders for Mourinhi’s job is RB Leipzig boss, Julian Nagelsm. Another coach being touted to replace Mourinho is Germany and Spurs legend Jurgen Klinsmann.

Other also being considered include: Leicester boss, Brendan Rodgers, who was regarded as an early second-favourite, with club favourite, Ledley King, Steven Gerrard and Massimiliano Allegri also linked.

Announcement of Mourinho’s departure came just hours after Tottenham became one of six Premier League clubs to sign up for the controversial European Super League, ESL.

Tottenham has struggled 8n their last three matches, drawing 2-2 with relegation-threatened Newcastle, soundly beaten 3-1, despite scoring first, by Man United and drawing 2-2 at Everton over the weekend.

The North Londoners now sit seventh in the Premier League, five points off the top four, with Liverpool and Chelsea – in sixth and fifth respectively – able to increase that margin with their games in hand.

Mourinho has suffered 10 league defeats this season, for the first time in his long career.

In 2020-21, no team has dropped more points from winning positions than Spurs, with 20.

After taking over from Pochetino, Mourinho rescued Spurs from 14th in the table to finish sixth, securing Europa League football for the current campaign.

But after a hot start, Tottenham have faded fast and could now miss out on European football – including the new Europa Conference League – next season altogether.

My Experience Can Transform C’River To Prosperous State -Senator Bassey