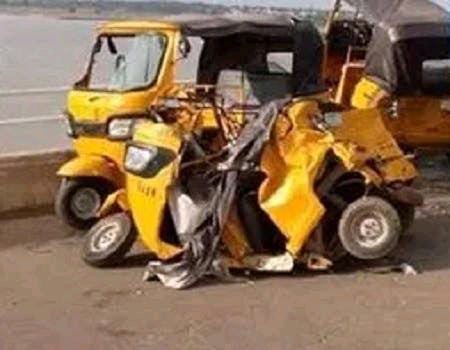 …After Tipper Crushed 3 To Death

And the reason is not farfetched: the people are angry and calling for the heads of tipper drivers, until one of them, who is now in police custody, who crushed three to death at the weekend, is apprehended and delivered unto them for their own kind of reprimand.

The incident happened when the tipper, said to be descending a slope was suddenly crossed in the front by a tricycle (keke NAPEP) that had three occupants in it.

Eye witnesses told this reporter that the tricycle must have carelessly done so while using a low gear to drive, adding that that must have made it hard for it to move fast and escape the imminent crush by the raging truck.

The truck, according to eye witnesses, unable to be controlled by the driver, within a twinkle of an eye rammed into the ‘Keke’ and wildly crushed it leaving all the three occupants dead on the spot.

The fatal accident, according to sources occured on the old Ilorin-Jebba road, that runs through Oke Oyi town.

It was said that the keke driver was crossing the road to get to a filling station on the other side to buy fuel, when the accident occurred.

An eyewitness told CompassNG, “It was too late for the tipper truck driver to apply break and consequently crushed the tricycle which led to the death of the three passengers.

“The angry residents of Oke-Oyi, set the tipper truck on fire to retaliate the death of the passengers of the tricycle. The driver of the truck was beaten mercilessly before he was rescued by policemen drafted to the scene of the accident.

“The residents also barricaded the road and truck drivers plying the route had to divert to neighbouring Osin village to take cover.”

Confirming the incident, spokesman of the state Police Command, DSP Ajayi Okasanmi, said normalcy had been restored to the area by the policemen drafted there.

Okasanmi also warned residents against taking law into their hands.