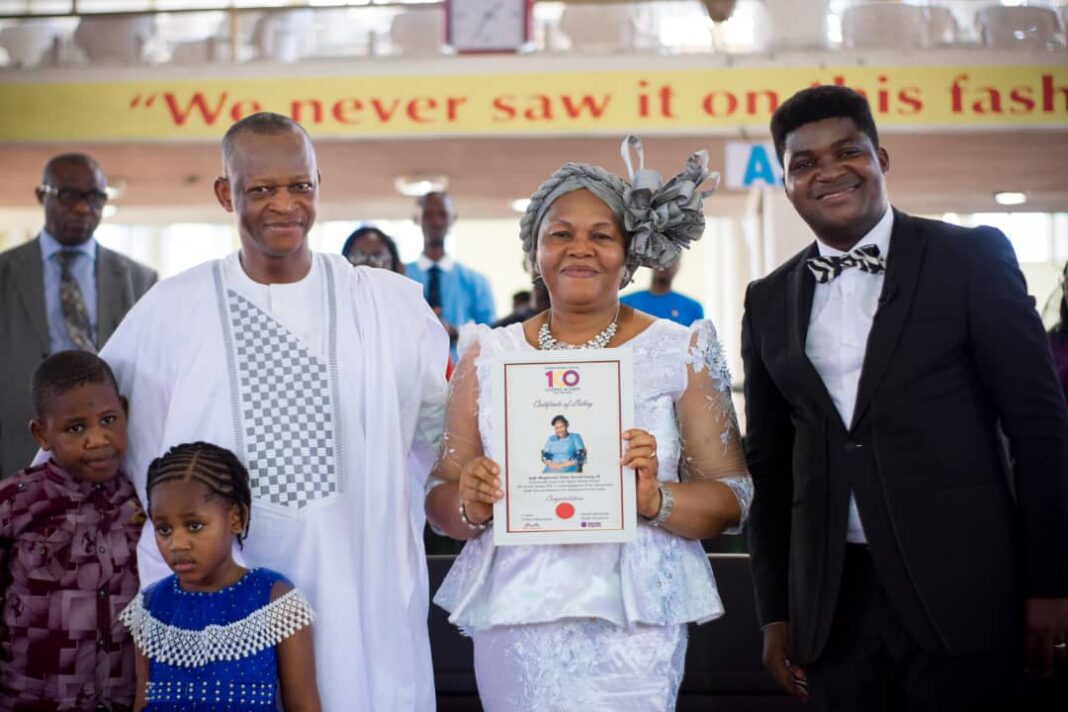 Wife of the National Publicity Secretary of the Pentecostal Fellowship of Nigeria, PFN, and General Overseer of Christian Central Chapel International, CCCI, Magistrate Helen Emmah Gospel Isong, on Monday in Calabar, said that the award of honour bestowed on her by an Abuja-based group would encourage her to do more in terms of impacting positively on the lives of her immediate community.

The cleric’s wife made the remarks while fielding questions from journalists in Calabar, shortly after receiving the award of honour from the Abuja-based group, operating under the aegis of Profiles, Biographies and Gender Perspective, where Isong’s wife was mentioned among 100 Most Influential Women in Nigeria.
The award, which is organized to mark women’s month, which officially kick-started on March 8, this year, was conferred on her to spur women to impact more on the society. Mrs Isong said, “I am humbled to have been selected among the 100 leading women in Nigeria. This award would definitely spur me to impact positively more on my generation.

“The award is a tonic; and I must confess that I am humbled. I never knew people were watching and were taking note of the little we are doing in our corner. I am not surprised, however, because the Bible says if you serve God, God Himself will honour you, and I return all the glory to Him.

“I encourage our young girls to discover something unique in the chosen 100 women and try to emulate and pattern their lives towards them. Indeed they have something imbeded in them to offer and so should be regarded as role models. With this, our society will become a better place for all of us.”

In his remarks, the group’s Executive Director, Pastor Ubi Onen, stated that the group is profiling phenomenal women in the country, who have contributed so much towards societal development, stressing that the compendium published by his group is one of the most qualitative and up-to-date biographical profile on Nigeria’s 100 Most Inspirational and Influential Women.

While urging upcoming women in Nigeria, who may have been limited by circumstances of life never to give up, Onen stressed, “Some of these women we are profiling were also, at a point, regarded as never-do-wells. “The lives of these women should motivate every other woman in Nigeria. These women had passed through the same challenges posed by our patriarchal society, yet they stood out from the crowd.

“Lady Magistrate Helen Emmah Isong has done very well in several areas; she is a fantastic woman of God, and a fantastic member of the bench. One of the reasons the annual profiling is done is to encourage our young ladies to rise above limitations. If Lady Isong could get to where she is, then any other woman, who is focused and determined, can achieve her life’s ambition and dreams.”

The Director named some of the women his organization had already profiled, alongside Lady Isong, within the year to include: Justice Akon Ikpeme, Mrs. Winifred Oyo-Ita, Prof. Ngozi Okonjo-Iweala, Aisha Yesufu, Amina Mohammed, Oby Ezekwesili; Professor Eka Braide, Justice Philomena Ekpe and Rosemary Obanya, amongst others.