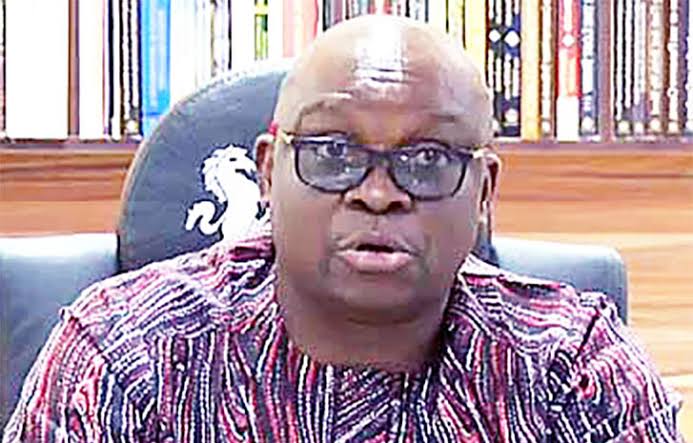 Present at the meeting with Fayose were: Chief Femi Babalola and Alhaji Adebisi Olopoeniyan.

This is coming barely 24 hours after the governor of Oyo State, Engineer Seyi Makinde met with some party leaders from the South West in Ibadan.

Makinde, had met with former governors of Osun and Ekiti states, Prince Olagunsoye Oyinlola and Engr. Segun Oni respectively; former Deputy National Chairman of the PDP, Chief Bode George, among other, for a zonal leader’s meeting at Government House, Agodi, Ibadan, with the conspicuous absence of some party leaders in the region.

Engr. Femi Babalola Jogor and Alhaji Bisi Olopoeyan, from Oyo State, who were not at the Ibadan meeting on Friday, however, attended another zonal meeting, called by former governor of Ekiti State, Fayose.

The meeting, said to have been attended by bigwigs in the South West PDP was held at Fayose’s Lagos residence.

In a telephone chat with Alhaji Olopoeyan after the meeting, he said he is not aware that the South West PDP had any meeting in Ibadan on Friday

He said, “I was not informed about any South West PDP leaders’ meeting held in Ibadan yesterday, and am not bothered as I was not invited; but the same South West PDP invited me and others to represent the state party in Lagos, so, we didn’t have choice, our leaders called us and we have to obey.”

When asked what they discussed at the meeting, he said, “I’m on my way to Ibadan now, please, when I come, I will explain to all our party leaders and members. We went to the zonal meeting for the progress of our party and I can assure all PDP members in the state that the meeting was fruitful. When I come, we will all know the outcome, just wish me a save journey back to Ibadan.”

The communique stated, “We leaders of the party gathered in a meeting in Lagos to deliberate on the affairs of our party, reposition it for greater success hereby resolves as follows;

“We take due notice of the efforts of the National Working Committee, NWC, geared towards sustaining our great party and extending its frontiers across the nation and commend it for its dedication and commitment to the party.

“We particularly congratulate them for the victory of the party in the last gubernatorial election in Edo State.

“That sequel to the above, we also commend and congratulate Governor Nyesom Wike of Rivers State, who was the Chairman of Edo State Campaign Committee and his team for their competence, commitment, dexterity and successful management of the Edo State election.

“We also pointedly underscore the fact that the approach and attitude to the prosecution of their assignments was the required catalyst for the party’s success. We also congratulate the people of that state for voting the PDP.

“That we note very sadly, the abysmally woeful performance of the party in the last gubernatorial election in Ondo State. We declare that it is disappointing that we lost that election so colossally in a state where we won the presidential election, two senatorial and three House of Representatives’ seats in 2019.

“This loss runs contrary to the trend of recent success attained in such elections in (a) Oyo State, which we successfully won in 2019; (b) Osun State, which we won outstandingly, but was irresponsibly hijacked by the All Progressives Congress, APC-controlled Federal Government, through criminal abuse of privileges and (c) Ekiti State that was hijacked.

“Therefore, it is resolved that a five-man panel is hereby set up to study, assess and identify factors responsible for this unprecedented woeful performance in Ondo State, and submit its report within a month.

“This panel must examine all issues relating to election planning, management and prosecution; identify all lapses and make useful recommendations to prevent such shoddy performances in the future. The panel’s report will be submitted to the NWC for further actions.

“We also note that a group of people are beginning to introduce intra party violence within the zone. This ugly development, which possesses the capability to destroy amity, unity and comradeship within the party must be checked at once.

“In view of this, the NWC is hereby encouraged to take stringent actions against identified sponsors of such actions.

“Therefore the panel’s report, detailing all incidences of violence and their sponsors will be forwarded to the NWC for further action.

“We are aware of the fact that the zonal congress will hold in due course, thus the report of the Committee on Zoning of Executive positions was received and deliberated upon.

“All the states will contribute additional Ex-Officio members to the Zonal Executive.

“In view of the fact that we place high premium on solidarity and comradeship amidst the leadership and membership of the party, we hereby set up a Committee of Six, with a member from all the states in the Zone. Members are Engr Femi Babalola, as Chairman, Chief Kolapo Ogunjobi, Barr Ahmed Okandeji Mustapha, Chief Idowu Odeyemi, Chief Tunde Akindehin and Prince Diran Odeyemi as Secretary.

“The Terms of References shall include reconciliation of thorny issues within the party, crisis settlement and all other sundry issues that may arise.

“We also wish to encourage the NWC to be ready to discipline errant member(s) of the party who deliberately take any action that may compromise the peace and interest of the party in the South West; irrespective of position, status and privileges. It is only when discipline is enforced that the party will continue to grow and attain success.

“As responsible party leaders, we recognize the fact that the NWC remains the ultimate authority over the party and as such trust in its competence to address all issues and matters developing within the party, as such hold firmly and trust that it will not share its sacrosanct responsibilities with anybody or group.

Therefore we shall seek audience with it in respect of developments within the party.”

Hushpuppi: Fugitive Supercop And His Godfather