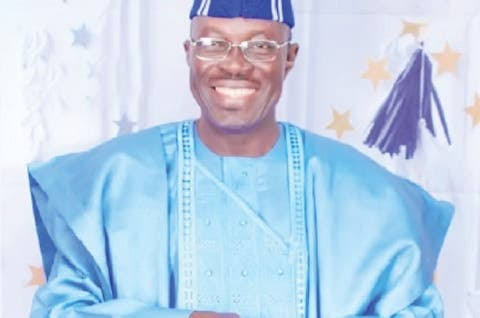 …Bows To Win Lagos From APC

Former Deputy National Chairman, South, of the Peoples Democratic Party, PDP, Chief Olabode Ibiyinka George, has threw his weight behind the aspiration of former deputy governor of Oyo State, Taofeek Arapaja, who is gunning for the National Vice Chairmanship of the party in the South-West zone.

Describing Arapaja as a competent and devoted party chieftain, willing and raring to serve with the best of intentions and with the best of motives, and would no doubt succeed if voted in, George, who is also the Atona Oodua of the Source, promise to support the former ambassador in his quest.

The former military governor of old Onod State stated this when he played host to Arapaja, and his entourage at his Ikoyi office, in the course of his campaign to Lagos.

Arapaja, the candidate of mainstream PDP in the South West had earlier led his campaign team to the Lagos State party secretariat in Sogunle area of Ikeja, and was accompanied by the party’s zonal caretaker chairman, Dayo Ogungbenro; Chief (Mrs.) Abosede Adedibu, Hon. Dare Adeleke, among others, where he rallied leaders and members’ support for his aspiration and the 2023 polls, which he tasked them to ensure they win for the party by uniting and forgive the perceived wrongdoings on the part of fellow members.

WelcomingArapaja and his team with great pleasure to Lagos State as he embarks on a very significant journey to lead the South-West zone of the PDP, George pleaded with all PDP members in the state to unite, noting that a divided house is a defeated one.

The former Director-General of the PDP Presidential Campaign Organisation also identified those sabotaging the PDP in the state as the ones working for a ruling All Progressives Congress, APC, for selfish interest. He, however, observed that given the quality of leadership Arapaja was bringing to the table, all the six states in the zone, including Lagos, would be won by the PDP, come 2023.

He said, “Ambassador Taofeek Arapaja, my dear Aburo, it is my great pleasure to welcome you and all members of your team to Lagos State, as you embark on a very significant journey to lead the South-West zone as our National Vice-Chairman.

“The stakeholders and the elders of our party in Lagos State are all assembled here to hear from you the detailed visions, your ideals, your promptings and focus, which will help redeem and rescue our party in the South-West from the present wobbly, unstable platform.

George, however, said it was important for him to give some advisories ahead of the zonal congress, and as someone who had served as the first PDP National Vice Chairman of the zone, and having graduated to the second-highest position as the Deputy National Chairman of the party.

Enjoining Arapaja to let the constitution of the party be his guide like a constant northern star when he got into office, George charged the incoming National Vice Chairman to be fair and just in all his undertakings.

He added, “Always allow the redeeming precedents of old to sharpen your bearing, to strengthen your vision, to give a fillip to your commitments and your mission.

“You must be totally resolved, stern, immovable about the principle of non-interference of external forces in the affairs of the South-West.

“Whether it is the national organ or some extraneous states, none should be allowed to intrude upon the affairs of our zone.

“When disputes arise, there are already established internal procedures that we use to solve our differences amicably. Let the states sort out their conflicts without intrusive actors. This is the paramount culture of our party.

“The decision of the zonal meeting on the zoning of offices remains sacred, sacrosanct, firm, absolutely irreversible, because it is predicated on justice, fairness and truth.

“Adhere to the fairness doctrine in the conduct of primaries. Your leadership must be credible, straitlaced, equitable, sincere, thoughtful, genuine, true to yourself and to your God.

“I look forward to a zonal congress which will be a celebration of brotherhood, which will be a triumphant carnival of love, of friendship and party solidarity. May the good Lord bless you, grant you wisdom, strengthen your path as you begin this journey of revival and the collective renewal of our moral compass.”

In his speech, Arapaja, while acknowledging the leadership qualities of Chief George, in raising leaders, including the incumbent governor of Oyo State, Engr Seyi Makinde and himself, among others, noted that winning Lagos, come 2023 was a huge task.

He, however, tasked George, who he described as face of the party in Lagos State, to make winning Lagos for PDP one of his legacies, like Governor Makinde and himself, as well as several other leaders he had raised were.

Arapaja said, “It demands a lot of sacrifice to win Lagos. Baba, I demand that you make it one of your legacies. Whatever you can do Baba, I know it is not easy.

“In your lifetime, I am praying too that Lagos will be won by PDP.”

COVID-19: Nigeria In A State Of Jungle