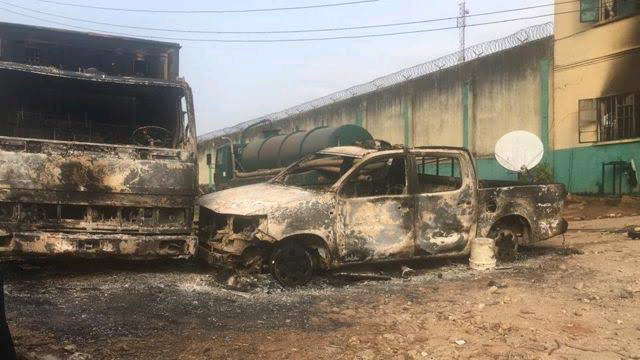 Members of group, who have been alleged if being responsible for the killing of security personnel in the South East, stormed the facilities and set alight some offices, structures and vehicles within the vicinity.

A security officer informed that the attackers used dynamite and sophisticated guns during the attacks.

He said, “Heavy gunshots and explosions could be heard in the area when they arrived with sophisticated weapons, including dynamite and guns.

“Meanwhile, while some of the inmates in the correctional facility refused to go, others have voluntarily returned.”

A security report also indicted that the attack started at 1am on Monday.

The report stated, “At about 0100hrs of date, armed men suspected to be members of IPOB/ESN criminal gang in their numbers invaded the Owerri Prisons, using dynamites and other heavy explosives, gained entrance and released some inmates in the prison.

“The hoodlums also attacked the state Police Headquarters, Owerri, while firing consistently with AK 47 rifles and explosives, released some suspects detained in the SCID cell and put fire on so many vehicles parked at the headquarter premises, including the SCID office building.

Spokespersons of the police and Nigerian Correctional Service have promised to issue official statements after the assessments of the damages done.