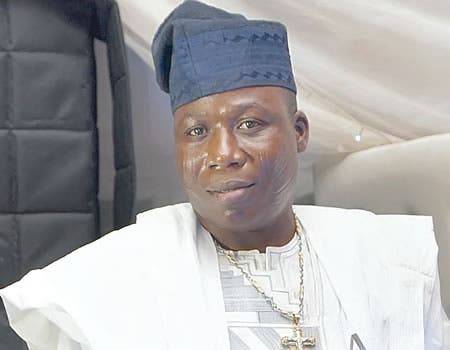 Controversial pan-Yoruba agitator, Sunday Adeniyi, also known as Sunday Igboho, has described the arrest order placed on him by the Inspector General of Police, IGP, Mohammed Adamu, as joke of the century.

IGP Adamu had given the Oyo State Police Commissioner the marching order to get Igboho arrested and transfered to Abuja, after making good the one week sacking ultimatum he issued to the Seriki Fulani of Igangan land, following accusations that he was the brain behind the continued senseless bloodletting and kidnapping in the South-West.

Challenging the police authorities to arrest him if they could, a visibly agitated and angry Igboho, in a viral video, challenged the government to show an instance where a Yoruba man living in the North or elsewhere in the country was involved in any heinous crime like kidnapping for ransom.

He queried where the Seriki Fulani got the enormous wealth that was associated with him, adding that before getting to the palace of the Seriki, they encountered three checkpoints manned by armed Fulani men.

Meanwhile, assuring the IGP that the situation culminating in the arson perpetuated was being investigated, even as Sunday Igboho was being hunted for, the Oyo Police Command, through its Public Relations Officer, CSP Fadeyi Olugbenga, said normalcy had returned to the troubled Igangan and Ibarapa areas, adding, “The situation in Igangan has been brought under control and investigation into the arson and the breach of peace in Igangan has commenced.

“This press release is to keep the public abreast of the security situation in Oyo State, especially the Ibarapa and Okeogun zones. Following the fear of threats to public peace, occasioned by the inciting pronouncement of Chief Sunday Adeniyi, A.K.A Sunday Igboho, the Oyo State Police Command jointly with the Operation Burst had embarked on visibility/confidence building patrol of the areas concerned.

“Sadly, the relative peace and calmness, being enjoyed, due to the visibility patrols of the security agencies were truncated by the visit of Sunday Igboho to Igangan, at about 1630hrs on 22nd January 2021. The visit had culminated in a mob action by some youths in the town, who, armed with different types of weapons, embarked on arson and a breach of peace. In the process, grievous hurt was committed against one of the police officers, while discharging his statutory duties. It is necessary to state that, in handling the situation, security operatives applied extreme caution to avoid casualty and to avoid the situation from degenerating to a complete breakdown of law and order.

“Be that as it may, the Commissioner of Police, Oyo State Police Command, would like to appeal for calm. Well meaning and peace loving elders in the community are enjoined to caution and advise restive youths to sheath their swords and shun violence in addressing the complex situation at hand.

“The youths should avoid being used as pawns to ignite ethnic war. At no time has violence been used as weapon to address security challenges. It is also necessary to mention that, substantial numbers of suspects (of different ethnic backgrounds) were arrested in connection with virtually all the cases of kidnapping or assassination, which had occurred in the state. Some have been arraigned in the court of law and being remanded in correctional facilities, while investigations are still ongoing in some of the cases.

“The Commissioner of Police would like to reiterate that the security agencies will not watch while some criminal elements take laws into their hands. Investigation into the arson and the breach of the peace, which occurred at Igangan will be investigated to logical conclusion and culprits shall be brought to justice. Once again, the Commissioner of Police calls for calm and solicit the support of the good people of Oyo State in ensuring that we keep the state safe and secure, please.”