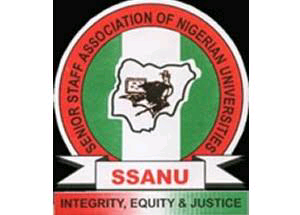 The Senior Staff Association of Nigerian Universities, SSANU, has said it would not call its members back to work until the demands leading to the ongoing strike action are met.

The University of Ilorin chapter of SSANU chairman, Mr. Oyedepo Olorunjuwon, who made the declaration while fielding questions from newsmen at the weekend, said this would be the position until the demands were attended to, despite the threat of ‘No Work, No Pay’ by the Federal Government.

Mr. Oyedepo said that the Federal Government’s threat would be met with stiff resistance, adding that all members of the association were resolute on staying away from work until their demands were met.

Noting that during the strike last week, one gate of the University of Ilorin was opened for skeletal operations, he stated that in the coming week, all gates would be under lock and key, thereby paralysing the entire system as a way of pressing home the demands

He therefore urged all SSANU members to ignore the threat of ‘No Work, No Pay’ by the Federal Government, reminding his members that the same was done to the Academic Staff Union of Universities, ASUU, that did not hokd water.

Averring that since the only language government understands was that of strike only, the chairman added that strike would therefore be the only tool for pressing home the demands of SSANU.

He, however, expressed optimism that government would not want to destroy its own institutions as a result of demands by SSANU, but stated that should the government ignore the association’s call, the expectedly short strike could be prolonged.

The SSANU chairman, noted that though facilities in the universities did not deteriorate during ASUU strike, he warned however, that allowing them to remain idle and unmaintained this time around could be very costly for the government to restore when the unexpected strike gets prolonged and after it must have been over.

He called on parents of students in Nigerian universities not panic, but rather mount pressures on government to speedily look into SSANU demands for execution.

Meanwhile, management of the University of Ilorin had said re-opening of the students’ hostels earlier scheduled for Monday, February 15, has been postponed.

This was contained in a statement by the university at the weekend, which said, “This is to inform 100 Level students of the University that the reopening of school hostels, earlier scheduled for Monday, 15th February, has been postponed.

“This is due to the on-going strike by the non-teaching staff, which has affected the source of electricity and water supplies to the hostels.

“A new date for the reopening of the hostels will be announced in due course.

“We appeal to our students, on whose welfare we place a very high premium, to bear with management and await further announcements.”

The statement also added that “virtual lectures will continue as scheduled for all categories of students.”