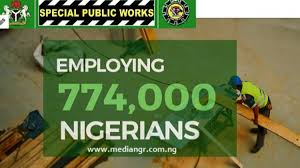 The Nasarawa State office of the Federal Government’s Special Public Works, FGN/SPW, Programme on Thursday began recruitment of street hawkers and artisans across the state for the 774,000 jobs of the programme.

Chairman of the Nasarawa State office of the FGN/SPW programme, Kasim Mohammed Kasim, led officials of the programme in the state on the recruitment exercise in Akwanga, Nasarawa Eggon and Lafia local government areas of the state.

Addressing journalists shortly after carrying out the recruitment exercise in Gudi, Nasarawa Eggon and Lafia towns, the state chairman of the programme, Kasim, disclosed that two persons were arrested in Akwanga Local Government Area for selling of fake recruitment forms of the programme to unsuspecting members of the public.

Kasim however assured of his commitment to comply strictly with the instructions of the Minister of State for Labour, Festus Keyamo, who had earlier warned against hijacking of the exercise by politicians.

He said, “Nasarawa State will not differ on the position of the minister, but work in accordance with the mandate of the Federal Government in achieving the aims and objectives of the programme.”

Kasim however warned those persons that may want to take advantage of the exercise and dupe the public that the forms are not for sale and anyone found selling it will be arrested and prosecuted accordingly.