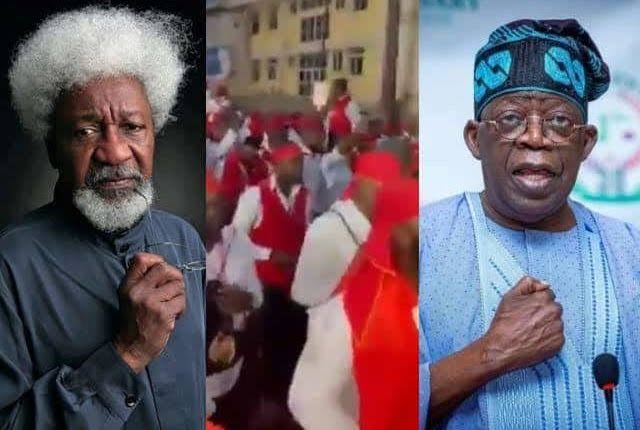 During their 70th anniversary celebration that lasted from Friday to Sunday, penultimate weekend, members of the National Association of Seadogs, aka Pyrates Confraternity, converged on Ikeja, the capital of the former federal capital, Lagos State.

They were a colourful sight to behold in their white long-sleeved shirts, black trousers tucked into white socks, black shoes, sashes, red regalia and red scarves bearing the skull and crossbones emblem that serves as an allegory of life’s friability.

Pyrates were not in Ikeja on sight-seeing. They were not in Ikeja to grovel before the political seat of power in Alausa. In Ikeja, Seadogs brainstormed on burning national issues and advanced the need to check the disturbing wave of insecurity across the country, calling on authorities to redirect the drifting ship of state away from the yawning precipice.

After the jaw-jaw, the confraternity, in its characteristic manner, held a massive procession along the streets of Ikeja on Sunday, singing a medley of state-of-the-nation songs, among which was the chart-bursting ‘Emi lokan’ that went straight up to No 1 on social media billboard.

Founded at the University College, Ibadan, in 1952, by seven adventurous undergraduates, known as the Original Seven, the National Association of Seadogs is a charitable and humanitarian confraternity, registered with the Federal Ministry of Internal Affairs under the Land (Perpetual Succession) Act Cap 98, with branches spread across the 36 states of the federation, the FCT, and countries such as USA, UK, Canada, Japan, The Netherlands, Ireland and South Africa.

The Original Seven include Wole Soyinka, Ralph Opara, Pius Oleghe, Ikpehare Aig-Imoukhuede; Nathaniel Oyelola, Olumuyiwa Awe and Sylvanus U. Egbuche. They formed the Pyrates Confraternity to fight elitism and class privilege by rich students, who looked down on poor students at the university.

The idea that fertilised the germination of the Pyrates Confraternity was found in the novel, Treasure Island, written by Robert Louis Stevenson (1850-1894), on the escapades of pirates.

In drawing up the philosophy for their confraternity, the Original Seven adopted the scant but good traits of a few pirates on Treasure Island. They distilled the good traits which include vision, bravery, loyalty, comradeship, honesty and reliability into their guiding principles called the Four Compass Points, and these are: Against Moribund Conventions, Against Tribalism; For Humanistic Ideals, and For Comradeship and Chivalry; while they jettisoned bad traits such as deceit, drunkenness, corruption and hypocrisy exhibited by many pirates on Treasure Island.

The Original Seven also changed the spelling of pirate to Pyrate in order for their organisation not to be mistaken for the contemptuous sea-going bandit buccaneers, who are loosely called pirates.

Like Pyrates, which is a moniker, Red Devils, is also an example of a curious name borne by the renowned Manchester United FC.

The inflection of the noun ‘pirate’ to ‘Pyrate’ isn’t new to intellectual circles; Ghanaian writer, Ayi Kwei Armah, inflected the adjective ‘Beautiful’ in the title of his classic novel to read ‘The Beautyful Ones Are Not Yet Born.’

A defunct Nigerian newspaper, Weekend Concord, owned by the presumed winner of the June 12, 1993 presidential election, the late Bashorun MKO Abiola, once headlined a story, ‘A disaster’, when the late Major General Abdulkareem Adisa, a former Minister of Works and Housing, was arrested over alleged coup plot.

Editor of Weekend Concord then, Oga Mike Awoyinfa, was specifically responsible for casting headlines for the newspaper. He also cast the headline, “Drugs? Not Alaafin matter,” when someone in the entourage of the late Alaafin of Oyo, Oba Lamidi Adeyemi, was caught with drugs in the UK.

According to the website of the organisation, www.nas-int.org, NAS closed down till date all its in-campus, student branches on July 28, 1984, when the despicable activities of imitator organisations masquerading as confraternities became rife on Nigerian campuses.

The song, Emi lokan, wasn’t the first NAS would compose to lampoon bad leadership in Nigeria. They had sung ‘Ogoni people don suffer’ to decry the degradation of Oginiland, they also sang ‘Kenule Saro-Wiwa’ to lament the killing of the Ogini activist, just as they sang ‘Chicago and Toronto universities’ to criticise the controversies surrounding the certificates of the All Progressives Congress, APC, presidential candidate, Asiwaju Bola Tinubu, and a former Speaker of the House of Representatives, Salisu Buhari.

It’s against the aforementioned historical background and evolution of the PC that many have seen the song, ‘Emi l’okan,’ as another apt commentary on governance and leadership. To this set of watchers, it was wrong of Soyinka to frown at the mocking of Tinubu, who propounded the ‘Emi l’okan’ entitlement theory, when he staked his claim to the presidency in a famous speech in Abeokuta recently.

To this group of people, Soyinka was protecting Tinubu, because both of them are of Yoruba ethnicity. This group, comprising mostly people from the South-Eastern part of the country, reminded the Nobel laureate that he had called Patience, the wife of former President Jonathan, sheppoppotamus, in 2013.

Particularly, a lecturer, who teaches sociology at the University of Kansas, USA, Prof Ebenezer Obadare, in his article, “Wole Soyinka’s Overreach,” published in Premium Times, had criticised Soyinka at that time for the use of sheppoppotamus, a word he described as disrespectful of Patience.

It lies within the rights of Obadare to criticise Soyinka’s use of language against Patience. I commend his courage. For the purpose of the dialectics that Tinubu’s ‘Emi l’okan’ has thrown up, however, it should be noted that Soyinka spoke against the overbearing tendency of Patience in Rivers politics at that time on a personal level, and not as Capoon Blood of Tortuga. During the sheppoppotamus saga, the image of the PC was nowhere in sight. It was the white mane and the literary pen at work.

That said, the image of the Nobel laureate cannot be totally separated from that of the PC, an organisation he has ceaselessly provided inspiration to since inception. Because of his larger-than-life international and national image, partisan individuals or groups are wont to make political gain from Soyinka’s connection with the fraternity. This was what Kongi was speaking against in his disavowal of the ‘Emi l’okan’ song.

More importantly, the song was an antithesis to PC’s time-tested values that condemn the mockery of individuals on account of tongue, tribe, creed, colour, health, association etc. NAS is a non-political organisation, though members belong to various political parties, leaving the song to go unchecked would’ve put a question on the neutrality of the fraternity, and given some political parties an edge in the countdown to the 2023 presidential election.

Also, mocking Tinubu over his unconfirmed health status puts the lie to the respect African values place on the sick, as encapsulated in this Yoruba proverb, “A kìí ti ojú oní’ka mẹ̀sàn án kà á (you don’t mock the man with nine fingers).”

In condemning ‘Emi l’okan,’ Soyinka buttresses his argument, using the example of his ‘ideological uncle’, and author, the late CLR James, who ‘remained alert, lucid and combative for decades,’ despite suffering from Parkinson’s Disease.

If ‘Emi l’okan’ had criticised Tinubu for putting Lagos in his pocket, or condemned Peter Obi for the way he handled some financial transactions of Anambra State when he was governor, or knocked Abubakar Atiku over the privatisation of national assets, Soyinka wouldn’t have batted an eyelid.

For the first time in my life as a columnist, I defend Tinubu, because ‘Emi l’okan’ was an indecent blow below the belt.