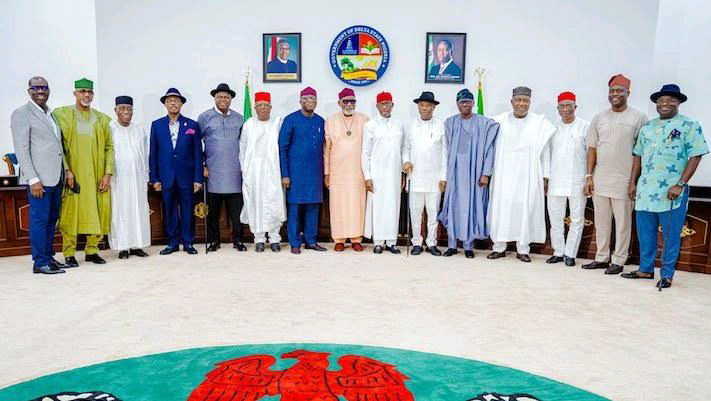 Governors of the 17 Southern states met on Tuesday, at Asaba the Delta State capital, where they not only unanimously agreed to ban open grazing in their respective states, but also called on President Muhammadu Buhari to urgently address the country over the worsening security situation across all parts of the country, insisting that the President’s silence was aggravating the situation.

Charging President Buhari, to as a matter of importance, convoke what it described as ‘national dialogue’ as parts of efforts at healing the seeming divide in the country, the governor’s, under the aegis of Southern Governors’ Forum, SGF, pointed out that it was only through dialogue that the widespread agitations for greater inclusiveness in existing governance arrangements could be resolved.

The Southern governors further expressed the fears that delay in convoking a national dialogue as a matter of urgency, could result to further calamity and snowballed into more problems.

These positions were canvassed in a 12-point communique issued at the end of the first crucial security meeting by the Southern governors on the state of the nation in Asaba, the Delta State capital.

Chairman of the Southern Governor’s Forum, and Ondo State governor, Rotimi Akeredolu, SAN, who read the communique on behalf of his colleagues to journalists, said that addressing Nigerians would help doused the current tension across the country.

The SGF, which in particular condemned the rising spate of insecurity across the country, expressed worries over the activities of armed herders, criminals and bandits who have infiltrated the Southern part of the country and called for a ban to open grazing in the region.

Akeredolu said, “Consequently, the meeting resolved that open grazing of cattle be banned across Southern Nigeria.”

Akeredolu reiterated that the ban on open grazing in the Southern region would be enforced to stem the tide of insecurity that is gradually creeping into the region to save lives and property of its people.

Insisting that the population growth in the Southern region has put pressure on available land, and increased the prospects of conflicts between migrating herders and host communities, the communique emphasised that the people of the Southern part of the country were committed to the unity and indivisibility of the Nigerian state, but on the “basis of justice, fairness, equity and oneness and peaceful co-existence between and among its peoples, with a focus on the attainment of shared goals for economic development and prosperity.”

The governors also urged the President Buhari administration to take bold steps to restructure the country in line with the vision of its founding fathers to enable it make progress as a federation.

Akeredolu said there was dire need for the “evolution of state police, review of revenue allocation formula in favour of the sub-national governments and creation of other institutions, which legitimately advance our commitment to and practice of true federalism.”

The communique further “recommended that in deference to the sensitivities of our various peoples, there is need to review appointments into Federal Government agencies, including security agencies, to reflect federal character as Nigeria’s overall population is heterogenous.

“The meeting therefore recommended the activation and establishment of ports in other states of the federation to create new jobs and promote socio-economic activities in the country.”

On COVID-19, the governors warned against another lockdown in the country, saying that the economic implications of such step would be grave

They however advocated for greater “coordination and cooperation between Federal and state governments in evolving strategies for dealing with the pandemic.”

The governors of Osun and Cross River states, Isiaka Gboyega and Prof. Ben Ayade, respectively were absent at the meeting.