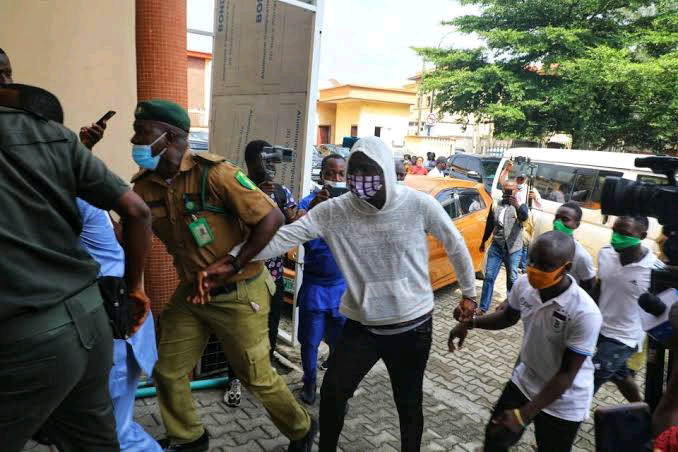 As the trial of Nollywood actor, Olanrewaju Omiyinka, aka Baba Ijesha, accused of sexual molestation of a minor continues on Thursday, two Senior Advocates of Nigeria, SAN, and 17 other lawyers, appeared at the Lagos State Special Offences Court in Ikeja to argue the child molestation allegation on his behalf.

Dada Awosika, SAN; and Babatunde Ogala, SAN, announced their appearances before Justice Oluwatoyin Taiwo, during Thursday’s proceedings, while the Lagos State Director of Public Prosecution, Olayinka Adeyemi and four other prosecutors appeared for the state.

Baba Ijesha, who wore a white hooded jacket and a mask, arrived in court in a Black Maria.

Omiyinka is standing trial over allegation bothering on rape, sexual assault and abuse of a minor by the Directorate of Public Prosecutions in Lagos.

Appearing before Justice Taiwo, the state counsel, Mrs Olayinka Adeyemi, said that the state had filed six-count charge against the defendant, urging the court to take the plea of the defendant.

The prayer was granted and Baba Ijesha pleaded not guilty to all the charges levelled against him, following which Mrs Adeyemi asked for a trial date, while asking court to remand the defendant in correctional facility pending commencement of trial.

But in a counter reaction, Baba Ijesha’s legal team, led by the two SANs, Messrs Awosika and Oganla, along with 17 others, informed the court that they had filed a bail application and have served same on the prosecuting team.

Ogala urged the court to grant them audience to argue the bail application, his prayer was opposed by the state counsel, Mrs Adeyemi, who stated that her team is yet to verify the medical report which the defense relied on for his bail consideration.

In a short ruling, Justice Taiwo granted the request of the defense team and asked parties to argue the bail application.

During the argument of the bail application, Ogala urged the court to grant Baba Ijesha bail, relying on Section 36(5) of the Constitution, insisting that the defendant also ought to be granted bail, considering his popularity and the credible sureties provided.

The judge, however, stood down the case for ruling.

Make Me Be April