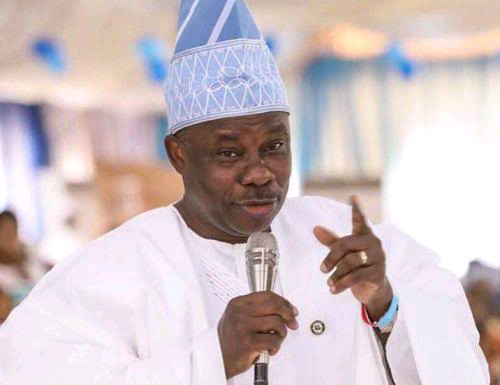 The man called Ibikunle Amosun seems to be the “self acclaimed” most powerful politician in Ogun State. He and his supporters would claim this because it looks like he had become a sacred cow and untouchably so.

These conclusions are not far-fetched, going by his antecedents in the political cycle of the state and Nigeria at large, especially in recent years.

It would be recalled that on assumption of office in 2011, he challenged his predecessor, Otunba Gbenga Daniel, on several issues which almost brought the latter into public disrepute. He practically declared the duo of Aremo Olusegun Osoba and Otunba Gbenga Daniel persona-non-granta during his eight-year rule in the Gateway State.

Towards the 2019 elections, the tall-capped man was hell bent on determining and anointing his successor, probably to cover up his own “dirty linens,” but he failed, as God installed Prince Dapo Abiodun as his “Child of Destiny,” yet Amosun did not accept God’s judgement. He was and still remained an open enemy to the incumbent administration from the same party.

Unexpectedly, Governor Dapo Abiodun looked away as if he never witnessed the days Amosun was tormenting him and his supporters during the electioneering period. He believed dealing with Amosun might be a major distraction for his administration, hence he adopted a system of government of inclusiveness. Almost all aggrieved partymen were brought into Abiodun’s fold except Amosun and his men, who felt too big to join God’s choice of a moving train.

All members of the state House of Assembly, who won under Senator ibikunle Amosun’s adopted Allied Peoples Movement, APM, have since returned to the main All Progressives Congress, APC, in the state. Many of them even contested for a return ticket during the recent APC primaries. About 70 per cent of them now have the APC ticket and shall be contesting during the general election scheduled for next year.

It is no longer news that the main “Judas” in the state House of Assembly, now suspended dishonourably, Dare Kadiri, is a tool used by Amosun to bring shame to the state and disrupt the legislative-excutive peace the state had enjoyed since 2019.

The reason behind our leaders’ silence on all these “bring down attitude” and several anti party activities of Senator Amosun is a question begging for a serious answer.

Is this the best way for him to maintain his ladder as a leader?

Now that his presidential ambition is dead on arrival, he becomes a mole and a threat to the rulling APC in Ogun State, which should not be underestimated.

Looking at the scenario with keen interest, does it mean that the Presidency is not on the side of the Ogun State APC and it seems like a privilege Senator Amosun enjoys which is making him more powerful and becoming a chameleon who changes his dress at will, irrespective of whose horse is gored.

How on earth can a serving senator under a party be referred to as a leader in an opposition party and everyone is silent? It’s a big slap to our integrity as a ruling party in a state of elites.

He has publicly declared his intention to support and mobilise for a governorship candidate under another political party, but he would work for APC’s presidential candidate. This was the same thing he did in 2019, even as a sitting governor. These actions are not only barbaric, but deserve a very stiff penalty before he damage the whole system for his selfish ambition.

It’s time to put a full stop to his egocentrism and political unfaithfulness and disloyalty.

He has enjoyed too much of patience from the party leaders, who are endlessly working day and night for the party’s continuous harmony.

Enough of his nonsenses, someone should take the bull by the horn and call him to order.