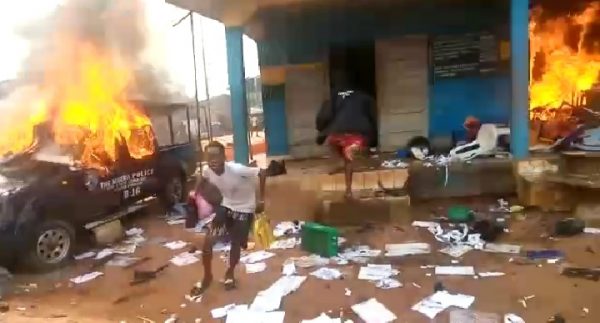 The Nigerian Senate has called on the Federal Government to allocate one percent of the Value Added Tax, VAT, to states affected by the violence and looting occasioned by the #EndSARS protest that held across the nation in October, 2020.

Adopting this resolution after considering two motions moved by Senators Abiodun Olujimi and Gershom Bassey, the lawmakers noted that private and public assets destroyed by hoodlums in Lagos State were estimated to be in the range of over N1 trillion by the state governo,r Babajide Sanwo-Olu; adding that a television station, BRT buses, and about 25 police stations were burnt in the state.

Senator Bassey, in his submission, decried the looting of warehouses in Calabar and the attack on the residence of some serving and past federal lawmakers, WAEC office, among others.

He said, “Cross River State, being a predominantly civil service state may not overcome the effects of the invasion since the destroyed state infrastructure were built from lean state resources over years.”

In his contribution, Senator Sani Musa, said, “ENDSARS came as a peaceful protest, but turned violent. It started in Lagos and later spread to other states, which led to the destruction of homes, businesses, and government offices. It is very unfortunate.

“The government needs to rebuild what was destroyed and pay compensation as well. It is their responsibility.”

The Senate also asked the Federal Government to set up a visitation panel to the various states destroyed by hoodlums across Nigeria for evaluation; even as it directed its committees on National Security, Defence, and Police to investigate the attacks by the hoodlums and how to prevent a recurrence.