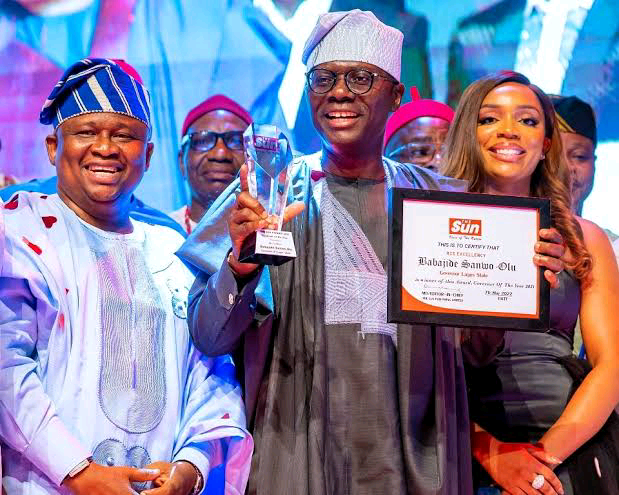 A formidable all-women non-governmental organization, NGO, the Women for Change Initiative, WCI, has described the recent award of Governor of the Year 2021 bestowed on Lagos State Governor Babajide Olusola Sanwo-Olu by The Sun Publishing Company as “another befitting feather in the cap of a die-hard performer and born achiever.”

Convener of the NGO, Barrister Eyitope Success-Adekunle, in a statement in Lagos on Wednesday, said, “The prestigious award, just like others before it is befitting and well-deserved in the sense that Sanwo-Olu merits it.”

She further suggested that others in various political office should emulate him for the general good of the citizenry.

Success-Adekunle observed that “if Sanwo-Olu has not been on top of the situation in the state, he would not have been considered for the prizes.”

Against this background, Success-Adekunle viewed the development as having a lesson to teach others that “from far and near, people are consciously and unconsciously monitoring the activities and performances of every office holders.

She submitted that “at the fullness of time, every individual under watch would be judged and rewarded accordingly.”

She noted that The Sun establishment must have painstakingly done a through independent investigation into both the open and hidden performance of the governor all this while before reaching the conclusion that he merited the honour.

She sermonised that “people put in any position of authority should make it a point of duty to act well both in performance, utterances and even in their body languages.”

The woman-activist and NGO boss, who asserted that the people and residents of Lagos State are very proud of having someone like Sanwo-Olu as governor, noting that “in their hearts, they are always thankful to the good Lord who blessed them with the silent achiever.”

She added, “Sanwo-Olu should be assured of his second term in office, because the appreciative citizens of the state would not hesitate to reciprocate his good gestures with votes that would assure his landslide victory next year.”

While felicitating with the governor, his team and the generality of the people of Lagos State, the human rights crusader and legal practitioner reminded Sanwo-Olu that the several awards being bestowed upon him is a challenge for him to do more, reminding him that “reward for a good job is a challenge to do more good work.”

Finally, the NGO also appreciated The Sun Newspaper establishment for injecting more hard work into the vein of the governor enthusing, “He would not disappoint you.”