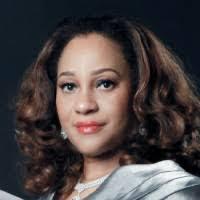 Wife of former Deputy National Chairman, South, of the People’s Democratic Party, PDP, Chef Bode George, Dr Roli Bode George, who is fondly called RBG, has added another shining feather to her academic cap, with a Doctor of Philosophy, Ph.D, degree from the University of Liverpool, United Kingdom.

The immediate past Director-General, DG, of the National Drug Law Enforcement Agency, NDLEA, and a woman of substance and a clear achiever in her own right, bagged the doctorate degree in Business Administration.

Dr George based her thesis on the growth and development of small and medium scale business enterprises and how they affect a developing economy.

Dr. George had variously distinguished herself as the National Commissioner representing Lagos and Ogun states at the National Population Commission, NPC and also as the first woman DG of the NDLEA.

With this veritable achievement, Dr. George is fulfilling her father’s long time instruction that she should work hard to reach the highest academic distinction just like himself. Her father has Ph.D in Civil Engineering.

She is presently putting her academic laurel to work through the creation of employment opportunities for hundreds of people in digital technology, smart, high-end printing press and a chain of people’s friendly restaurants.