The senator representing Cross River Central senatorial district at the National Assembly, Senator Sandy Onoh, has flagged off the rehabilitation of a 10.2 kilometre road, abandoned 40 years ago in Boki Local Government Area of the state.

Speaking during the flag-off ceremony of the rehabilitation of the 40-year old abandoned road project yesterday at Ndok Junction, which is a few kilometres to Ogoja Local Goveenment Area, which shares common boundary with the senatorial district of the state, Onor stated that the gesture was to meet the socio-economic development needs of the people in the area.

One stressed that upon completion, economic activities in the area would receive a boost. 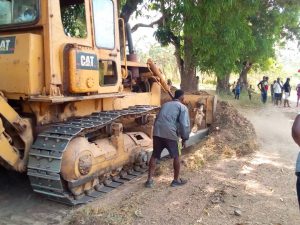 Represented by the Director General, Sandy Onor Campaign Organization, otherwise known as the Caterpillar Movement, Chief Joe Obi Bisong, Onor regretted that the road, which was the major highway traversing parts Ogoja and Boki local councils in the 1970s had been abandoned, thereby subjecting about 15 communities along the road to low productivities, due to it’s deplorable state.

Lamenting how the ugly situation had caused economic and social retrogression to the people of the affected communities, the DG described the road rehabilitation by the parliamentarian as “a dream come true.” 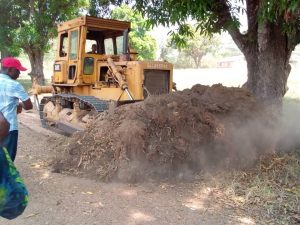 He explained further that since the law does not allow him to award contracts outside his jurisdiction he decided to limit the project to grading and lateriting.

He said that over 70 per cent of the road is within Ogoja, pointing out that the symbiotic relationship that had existed between the people of Boki and Ogoja would be strengthened by the development.

In a remark, a traditional ruler/clan head of Ndok, Ntol Clement Ashaba, said that he was highly elated at the generosity of the senator to open up the 10.2 kilometee road, which had been abandoned for over 40 years.