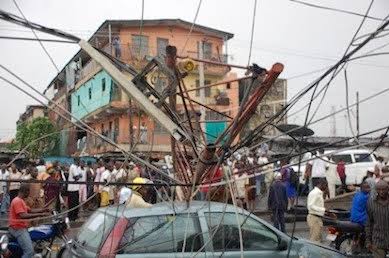 A heavy downpour attended with rainstorm on Saturday night in Ilorin, Kwara State, capital has rendered many residents homeless. The bad effects of the rainstorm, which also spread across other parts of the state, forced the state governor, AbdulRahman AbdulRazaq, on Sunday to seek Federal Government’s assistance to support the victims.

A government statement had said, “The governor is saddened by the havoc wreaked on various households in Ilorin, the state capital, and indeed elsewhere across the state by the heavy rain storm.

“He sends his heartfelt commiseration and a message of hope to such families in this trying time.”

As part of his proactive measures to mitigate the effect of this natural disaster, which had been predicted by the NIMET, the governor had last week visited various Federal Government agencies, including National Emergency Managent Agency, NEMA, in Abuja to seek special reliefs for Kwara in anticipation of the predicted bad effects of heavy rains this year.

The governor therefore pleaded that “the state government is again urging the Federal Government to urgently consider Kwara State for special support.”

Meanwhile, AbdulRazaq is said to have the plan to immediately set up a special disaster response team to collate data of areas affected and determine how his government could render supports based on “available resources.”

The statement added, “The governor is also aware of the damage to electric poles during the storm. He has directed relevant agencies to quickly fix the poles as soon as possible to avoid further damage and ensure the restoration of power services.”