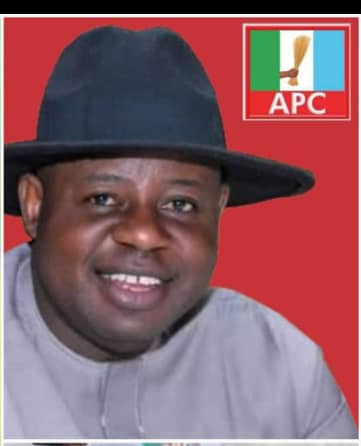 Newly elected chairman of the Cross River State chapter of All Progressives Congress, APC, Barr. Alphonsus Eba Ogar, has promised to promote peace, love, unity and growth of the party.

Ogar made the promise in an interactive session with journalists weekend in Calabar, a day after he was declared as party state chairman-elect for ruling APC in Cross River State.

The party chair, who promised to produce the next governor of Cross River State in 2023, said that among his major pre-occupation is to ensure that the APC is lifted to an enviable height.

He stressed that his cardinal objectives for the introduction of an agenda called PLUG – Peace, Love, Unity and Growth of the party – calling on all party supporters to join hands with him to build a strong united, indivisible and virile party in the state, in such a manner that the APC would become a force to reckon with.

Explaining that he is not a stooge to anyone, but a man with enormous capacity to deliver the goods any time any day, Ogar said, “Those who didn’t know my capacity felt I was going to be a mere weapon in the hands of Governor Ben Ayade. I have capacity to lead the APC to an enviable height.

“Because, as one who has been working with the governor as Director-General, DG, of Due process and Intelligent Bureau, the governor gave me a marching order to unite the party in the state.

“The problem of the APC in the state was leadership and we have that today.

“As former director general of due process, I hope to bring due process into party administration in Cross River State.

“My main agenda as chairman is peace, love, unity and growth, and with the solid foundation being laid for the party by my leadership, I want to be judged based on my PLUG agenda.”

Ogar stated that his definition of leadership is servitude, stressing that he will ensure that the APC begins serious evangelism to woo many back to the party.

The chairman-elect defined his aspiration and eventual victory as the longest aspiration to the chairmanship position in the history of two major political parties in Cross River State.

The APC chairman-elect stated that his journey to the position of chairman is in synergy with the biblical “Journey of the Magi,” where three wise men walked very long and torturous journey so that they can see the new born king, who was Jesus Christ, stressing that his victory is given to God’s glory.

2023: Why Power Should Shift To Benue South -Abba Moro