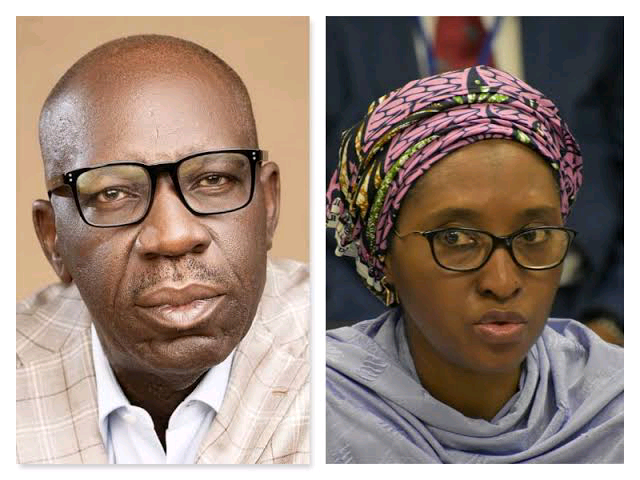 Edo State Governor Godwin Obaseki has faulted the Minister of Finance, Budget, and National Planning, Zainab Ahmed, for denying that the Federal Government printed N60 billion in March to support allocation to states.

Obaseki, who accused the Federal Government of “monetary rascality,” also tackled the Finance Minister for “playing the ostrich.”

In his reaction to the Finance Minister’s claim that the allegation was “untrue,” on Thursday, Obaseki tweeted, “While we do not want to join issues with the Federal Ministry of Finance, we believe it is our duty to offer useful advice for the benefit of our country.

“The Minister of Finance, Budget and National Planning, Mrs. Zainab Ahmed, should rally Nigerians to stem the obvious fiscal slide facing our country.

“Rather than play the ostrich, we urge the government to take urgent steps to end the current monetary rascality, so as to prevent the prevailing economic challenge from degenerating further.

“We believe it is imperative to approach the Nigerian project with all sense of responsibility and commitment and not play to the gallery, because ultimately, time shall be the judge of us all.”

Printing of money by Central Banks to meet cash shortages, otherwise known as quantitative easing, is not unusual, but has been criticised for its inflationary effects.

Recall that Obaseki was last week quoted to have raised the alarm over Nigeria’s financial position, which he said made the Central Bank of Nigeria, CBN, to print about N60 billion to augment allocation shared by states in March.

He had said, “When we got federal allocation for March, the Federal Government printed additional N50 to N60 billion to top-up for us to share.

“This April, we will go to Abuja and share. By the end of this year, our total borrowings are going to be within N15 to N16 trillion.”
But while answering questions from State House Correspondents on Wednesday, the minister had insisted that Obaseki’s claim was not factual.

She had said, “The issue that was raised by the Edo State governor, for me, is very sad, because it is not a fact.

“What we distributed at FAAC is revenue that was generated and in fact, distribution revenue is a piece of public information.

“We publish revenue generated by FIRS, the Customs, and the NNPC and we distribute at FAAC.