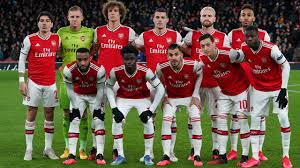 Arsenal Football Club, also known as the Gunners, ended a four-game winless streak as Alexandre Lacazette scored a brace in a routine 3-0 win over relegation-bound Sheffield United at Bramall Lane.

With Pierre-Emerick Aubameyang missing in action through illness, Lacazette clinically swept the Gunners in front to complete a brilliant team move before Gabriel Martinelli scored his first goal in an Arsenal shirt for 15 months following a serious knee injury

Lacazette was ice cool to slot home his 50th Premier League goal in the final five minutes as Arsenal moved back up to the ninth place ahead of their Europa League quarter-final second leg with Slavia Prague on Thursday.

Rock bottom Sheffield United’s fate is close to being sealed. They are 18 points adrift of 17th-placed Newcastle, with 21 points left to play for as the Sky Bet Championship beckons.