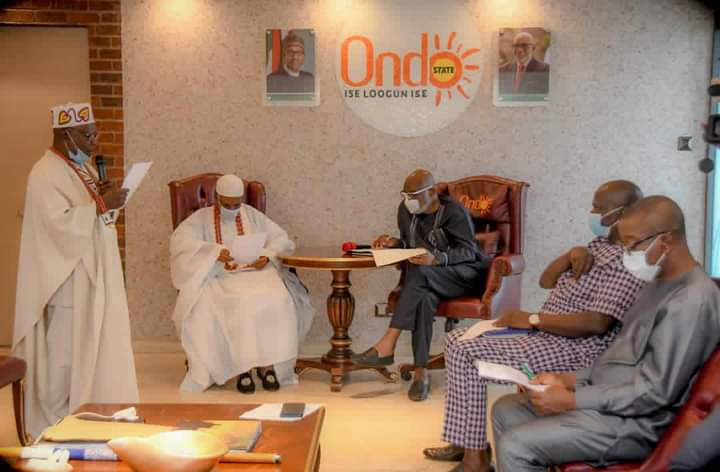 The Ondo State Governor, Arakunrin Oluwarotimi Akeredolu, SAN, has expressed happiness over the fruitful efforts to restore power to the southern senatorial district of the state after over 11 years of power outage in the area.

Arakunrin Akeredolu stressed that the power outage in the southern senatorial district of the state has always been a major concern for his administration and the Vice President, saying, “Nobody is happy that the South has been in darkness for so long. But it is not a thing within the power of what the state can do. What the state can do is to mount pressure on those who are in charge.

Briefing the governor, the chairman of the Ondo South Power Project Committee, Oba Festus Olumoyegun, the Oniju of Iju-Odo, said that tremendous progress have been made in reconnecting the district to the national grid.

Oba Olumoyegun said that power transmission to the area will be gotten from Omotosho Transmission Company of Nigeria.

Also, the Abodi of Kale, who is also the Chairman of Ondo South Power Project, Oba George Faduyile, appreciated Governor Akeredolu and Engr. Oyedele for their concerted efforts at getting the south out of darkness.

Earlier, the consultant for the power project, Engr. Idowu Desmennu, said that despite the long journey of about two and a half years, a success story has been recorded already, adding that by the end of November, power will start to radiate in Ondo South.

Engr. Desmennu said, “We have met with NDPHC, we have signed power purchase agreement with the community and the NDPHC. By the grace of God, by Friday, we are going to pay N371 million as security deposit for power we are taking from South.

“We have over 10,000 prepaid meters that we are ready to take off with. Our program there is also involving different value chains. Transformer value chain, different. Transmission.

“Now, in Okitipupa and Irele local government areas, none of the transformers are working, except three in Okitipupa. We are going to replace all the transformers so that they can have electricity. Where we don’t have enough, we put there. Where we have bad ones we change them. Because without these things it can’t work.

“Now, there are some areas where there are no network, we have planned to do it. I want to tell you that from the day we started, we have not collected a kobo from Ondo South and we will not collect a kobo until after three months, when the power start to roll expect their recharge cards and our recharge cards start from N300, hereby an individual who wants to use N100 a day can buy recharge card and use.

“It’s a new thing and all thanks to Engr. Oyedele who availed us the opportunity of the 5 per cent of power being generated at Omotosho power plant that can come to the community. We pleaded for it and the community is now distributing it.

“By today, TCN has been given the instruction to give us all the support we need. And I believe between 15th and 30th of November, power will start to radiate and by December and January, we will be welcoming you and the Vice President to come and commission the project.”