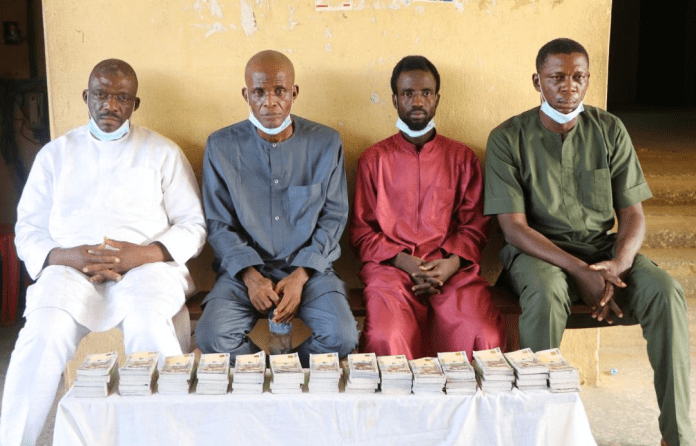 The suspects, arrested by the Wuye Division operatives are: Kamal Haruna, 27; Frank Onoja, 46; Adejoh Steven, 54; and Guede Nelson, 60; all male, for being in possession of counterfeit naira notes.

A statement by the Police Public Relations Officer, PPRO, ASP Yusuf Mariam, said that the suspects confessed to using the notes to defraud unsuspecting members of the public.

She also revealed that several suspected criminals have been arrested across the Federal Capital Territory, FCT, at different times.

The statement further said, “The FCT Police Command has arrested 11 suspects for one chance, fraud and armed robbery along Durumi, Wuye and Kafe-Life Camp axis.

“Amongst the suspects are: one Anthony Gambo, ‘m,’ 32 years; and Haruna Musa, ‘m,’ 25 years; members of a seven-man robbery syndicate arrested by police operatives from Life Camp, during routine patrol, after attacking and robbing a school at Kafe-Life Camp.

The statement further added, “In another development, police operatives from Galadinmawa arrested one Charity Timothy, 23 years, ‘f,’ and Sunday Godwin, 23 years, ‘m,’ along Durumi axis for one chance robbery.

“The suspects confessed to terrorizing residents along that axis. Exhibits recovered are: one (1) red colour Volkswagen car with registration number BWR 903 HE.”

IBEDC To Investigate Death Of Okada Rider, Passenger In Ibadan