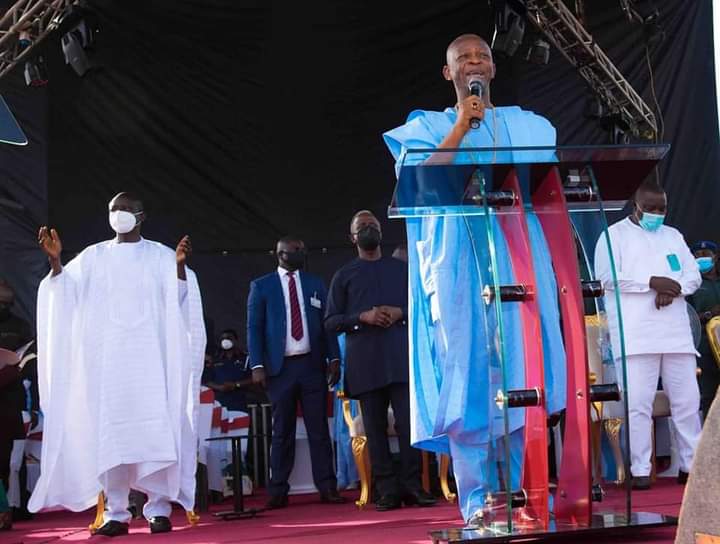 The National leadership of the Pentecostal Fellowship of Nigeria, PFN, has eelcted Bishop Francis Wale Oke, othe Sword of the Spirit Ministries, Ibadan,Oyo State, as its National President, just as it returned for a second term, Bishop Dr. Gospel Emmah Isong as National Publicity Secretary, among other elected over the weekend to manage the affairs of the Christian body.

Isong, who is the chairman of the Cross River State Anti-Tax Agency, is reelected into the national executive of the PFN, based on his track record in the last four years, where he was given the responsibility to manage PFN’s image.

The financial expert-turned preacher of the gospel of Jesus Christ is the General Overseer, GO, Christian Central Chapel International CCCI, a.k.a Faith Mansion World Headquarters, Ikot Ene-Obong 8 Miles Calabar,​ is re-elected due to his outstanding performance upon assumption into office as the image maker of the Christian body. The cleric was unanimously elected by his colleagues who actually wanted him to serve in that capacity and he emerged unopposed.

Among other outstanding personalities, who also were also elected in to the national executive of the PFN alongside Bishops Oke and Isong are: Archbishop John Praise Daniel of the Dominion Chapel, Abuja, as National Deputy President and Rev. Dr. Cosmos Ilechukwu of the Charismatic Renewal Owerri as National Secretary.

Others include: Rev. Sam Aboyeji of the Foursquare Gospel Church, who was elected as PFN National Treasurer; Pastor John Ayodele of​ the Redeemed Christian Church of God, RCCG, will serve the organization as ​ National Auditor and Bishop David Bakare of Faith Chapel, Kano, was returned as PFN National Deputy Secretary​.

Isong, who doubles as the National Patron of Nigeria Union of Journalists, NUJ, South South Zone, in a telephone conversation with CompassNG correspondent, in Calabar on Sunday, stressed that his reelection by PFN electorates at the just concluded biennial conference, in Enugu, would afford him a platform to propagate and defend the gospel of Jesus Christ.

Commenting on the outcome of the election, a member of the PFN, Pastor Ralph Okafor, hailed Bishop Isong in his reelection to serve in the Christian organization, stressing that it was Isong’s hardwork and and commitment to responsibility that made the who is who in the national echelon of PFN to vote Isong again into the national executive.

He siad, “I know Isong so much, here in Calabar, he has so many aged women in his payroll, and several others, who he settles their academic and rent bills. His philanthropic nature has catapulted him to that height.

“You can not serve God in truth, with your resources and He lets you down, at all; it has never happen. Isong has a good heart.”

Okafor stressed that Isong got what he deserved, having worked assiduously, speaking on behalf of the organization, particularly on issues that bothers on national interest, adding that it is not expected that he remains the same.

Also responding to Isong’s reelection, Pastor Pascal Mgbe of the Christ Ambassador, Ikom, stated that he knew that Isong would one day be reelected, based on his track record.

Mgbe stated that Bishop Isong’s ability to speak the truth and when controversial issues are being raised, he knew that Isong would go places, calling on Nigerian Christians, home and abroad to join hands with the national executive of the PFN in the promotion of the gospel of Christ.

76-Year-Old Arrested For Attempting To Shoot His Son