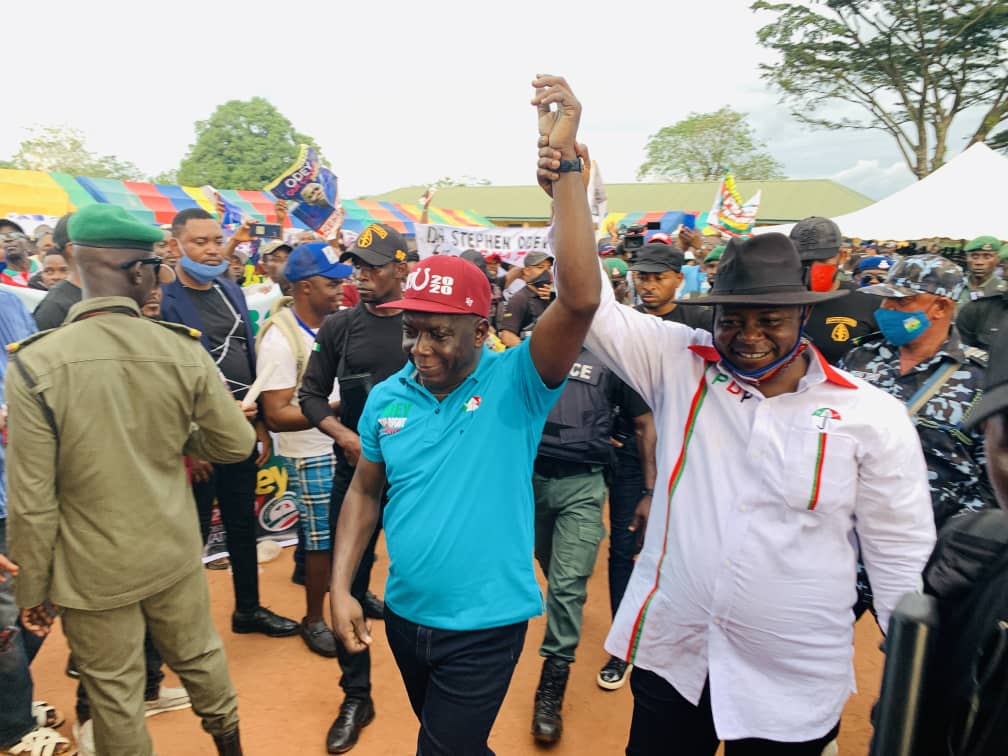 The Peoples Democratic Party, PDP, has finally handed over its flag to Dr. Stephen Odey, to enable him lock horns with his All Progressives Congress, APC, opponent in the October 31 bye-election for the vacant Cross River State Northern senatorial district seat.

The Chairman of the PDP Campaign Council/member representing Bekwara federal constituency at the National Assembly, Rt. Hon. Legor Idagbo, who spoke to our correspondent on the issue a day after the party handed over the flag to Odey, canvassed support for Odey, stressing that he is the authentic candidate with the political clout to turnaround the fortunes of the senatorial district.

The National Assembly member urged the people of the senatorial district to put their weight behind Governor Ben Ayade who is the party leader with regards to the policy decisions that would bolster the peace and unity to reposition the party in the Northern senatorial district of the state.

Idagbor, a former chairman of Bekwarra Local Government Area, averred that for those who have deliberately chosen to perpetually find faults with the activities of the Ayade-led administration despite the painstaking efforts of the state fovernor to decouple the state from it’s over dependence on federation allocation, with his industrialisation agenda, should join hands with the governor to raise the state to enviable height.

Stating that it is only a cursed generation that plays the blame game by abandoning their own for some unholy personalised interest, Idagbo further debunked the purported story that erstwhile governor of Cross River State, Senator Liyel Imoke is not supporting Governor Ayade, stressing that Imoke is giving his unflinching support to the Ayade-led administration without any controversy.

He siad, “Going by the history of Cross River State, no one has ever won the senatorial seat and moved to National Assembly without the blessings of a seating governor; Odey’s case shouldn’t be an exception.”

The state Deputy Governor, Prof. Ivara Esu, who flagged off the Dr Stephen Odey campaign charged stakeholders of the senatorial district to walk as one indivisible entity to work in one accord so as to ensure that victory is achieved in the senatorial bye-election.

Prof. Esu siad, “PDP is one indivisible entity and as such, it can not be divided for any personalised unholy interest. Leaders of the North should change the narrative for the sake of posterity.”

The former University of Calabar, UniCal VC-turn politician charged that all hands should be on deck so that victory can be achieved in the final contest.

In his remarks, Odey stated that he is the only candidate who has what it takes to lift the senatorial district to a higher pedestal, soliciting support of all.

He said, “I know that they are other contenders in this game, but then, I remain the only candidate that if given the opportunity to go to Senate, I shall give to you people effective representation.

“I see myself as someone with the requisite potentials to accomplish such herculean task and no one else among those yearning to occupy the senatorial seat.

“Just try me and see, you would be glad you did.”

Odey called on the good people of Cross River North to calm down and follow the rules and regulations of the PDP in the entire campaign process.

Lauding all party faithful who turned up to support the position of leadership of the PDP, Odey noted that the campaign train will leave no stone unturned in seeking the support of the people ahead of the October 31st senatorial bye-election.

The climax of the event was the official handing over of the flag to Dr Odey by Ntufam Edim Inok Edim, the Chairman of the PDP Care-taker Committee, in collaboration with the representative of the party at the national level.

Other government functionaries present at the occasion were the Speaker of the Cross River State House Of Assembly, Rt. Hon. Jones Eteng Williams, the Deputy Speaker, Rt. Hon. Joseph Bassey, Chief of Staff, CoS, to the governor, Hon. Martin Orim, the Secretary to she State Government, SSG, Barr. Tina Banku Agbor, members of the Cross River State Executive Council, members of the 9th Assembly, party stalwarts and leaders from other senatorial districts in solidarity with the North.