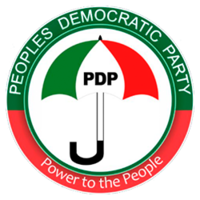 I bet, the Peoples Democratic Party, PDP, one-time ruling party, in Ekiti State, recently the main opposition party to the ruling All Progressives Congress, APC, is today a mere caricature, a peripheral party.

A definition of “peripheral” by Oxford Dictionary says: “of, relating to, or being the outer part of the field of vision.”

When something is on the periphery of your vision, you can only see it when you’re distracted or looking sideways.

Periphery means outside the boundary of something. If you’re on the periphery of a group, you’re not part of it. PDP is no longer part of Ekiti. It is in the hands of foreigners, those who know next to nothing about Ekiti, cannot speak the language and do not understand our shared values as a people. The _atohunriwas._

In politics, a real political party is an organised group of people, who have the same ideology, or who otherwise have the same political positions,  they are a defining element of representative democracy.

It is frequently suggested that peripheral parties should be discarded, for they are no party at all, but are opportunist organisations out to ‘game the system’.

These so called parties are regularly compared with supposed minor parties. There are two problems with this approach. First, attempts to operationalise a peripheral party have been ad hoc – no structure, no system.

Second, comparisons between ‘micro’ and peripheral parties are erroneous, as a party type is being compared with a classification based on the relevance of parties in the party system.

So, when someone claims PDP is talking or says he or she is talking for the PDP in Ekiti, ask such a person: which of the PDPs? The one that was, or the one that is to come, for there is no party that answers such name as PDP in Ekiti today. If there is, where is its secretariat? What is its official address?

As a matter of fact, such a people who claim to be representing PDP in Ekiti should be arrested for banditting a non-existing political party.

*Dipe is Senior Special Assistant to Governor Fayemi on Public Communications and writes from Ado Ekiti.