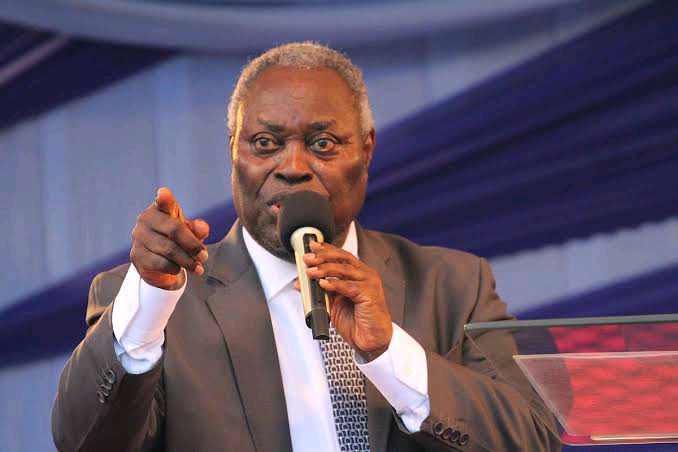 The General Superintendent of the Deeper Christian Life Ministry, Pastor William Kumuyi, on Thursday kicked off a Christian crusade, tagged Global Crusade with Kumuyi, GCK, at Eiyenkorin, an outskirt of Ilorin, the Kwara State capital.

The cleric, however, used the occassion to call on the Nigerian political leaders to take caution in picking same faith tickets as the candidates of their different parties.

Kumuyi, who paid a courtesy call on the state governor, Mallam AbdulRahman AbdulRazaq, at the Government House, Ilorin, told newsmen in an interview that politicians, particularly their leaders, should endeavour to consult widely in their quests to field candidates and their running mates for the 2023 general elections.

He averred that Nigerian political leaders needed to “consult widely and conduct research before coming to conclusion on the issue of Muslim-Muslim ticket or Christian-Christian tickets for the 2023 presidential election.

Pastor Kumuyi said that the presidential flagbearers, for instance, should also look at the heartbeats of the country and the desires of the people before taking their decisions.

He said, “Muslim-Muslim or Christian-Christan ticket is a difficult and slippery area. So, what I will say is that the political office holders should look at the heart beat of the country as well as the desires of the people.

“They should know that they are not there for themselves. They are there for all of us. They should ask and make their research about what the country wants.

“They should ask and make their research on what the country wants, what the people want and if they listen to the people, we will be confident that they will listen to us when they get there.”

Speaking on the lingering state of insecurity in Nigeria, the General Superintendent commended the frantic efforts of the security agencies to combat it, stressing that they, the military in particular, were doing their best.

He added, “By the grace of God, I believe that the security agents are doing their best. We can always improve. In every area of life, I will say there’s room for improvement.

“I want to credit the officers who are putting their lives on the line to secure the whole country. We should be praying for them that God will give them more wisdom and visible victory in the security of the country.”

He said that his mission to Kwara State was meant to be a blessing to the state, under a special supernatural deliverance for everyone through Christ, adding that “I’ll be praying for everyone at the end of every ministration for individual desires, aspirations and blessings.”

He enthused, “God is our Creator, whether we are Muslims or Christians or whatever religion you belong to. We are creatures of God. God is interested in blessing everyone. I’m here to be a blessing to everyone.

“There will be empowerment programme for all youth across religious divides, as it is meant to redirect the focus of the youth for positive future endeavours.”

In his remarks, Governor Abdulrazaq praised the Deeper Life Christian Bible Church for its empowerment programme, pointing out that it is in line with his administration’s youth-focused agenda.

The governor disclosed that the state government has set up a probe panel at the end of the #EndSAR protest, stressing that one of the recommendations of the panel was that governments should pay more attention to the demands of the youth in the country.