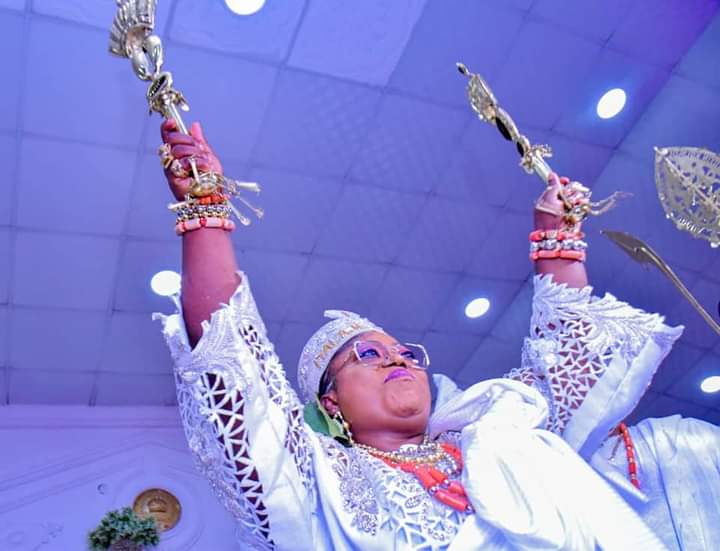 Wife of Osun State governor, Kafayat Oyetola, and the deputy governor of Kogi State, Edward Onoja, were among dignitaries who witnessed the installation of business tycoon, Princess Toyin Kolade as the Iyalaje Oodua by the Arole Oduduwa and the Ooni of Ife, Oni Adeyeye Enitan Ogunwusi, Ojaja II, on Saturday.

The event, which took place at Ile Oodua, the palace of the Oonirisa in Ile-Ife, also had in attendance the wife of former governor of Ogun State, Mrs Funsho Amosun and the paramount ruler of Agbor kingdom, the Dein of Agbor, amongst others.

Part of the installation rites was the leading of Kolade to Idi Aje, the shrine of Aje deity, before she was later received by the Ooni and other guests in attendance at the palace court, where prayers were offered for her.

Offering prayers for the new Iyalaje Oodua, Ooni Ogunwusi said that the title bestowed on Kolade would open the door to prosperity for her and the entire Yorubaland.

Speaking, the Iyalaje Oodua,Princess Kolade described her installation as “a divine call to duty,” thanking the Ooni for honouring her with the title.

She promised to work tirelessly to further promote Yoruba culture and tradition, as well as trade and commerce for the benefit of the people within and outside the race.